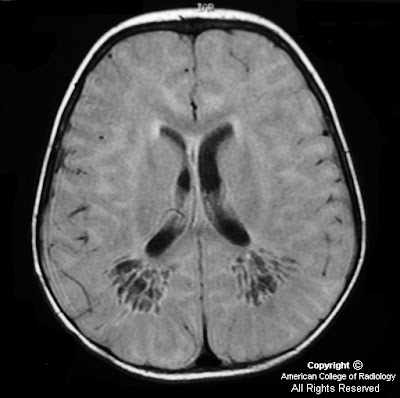 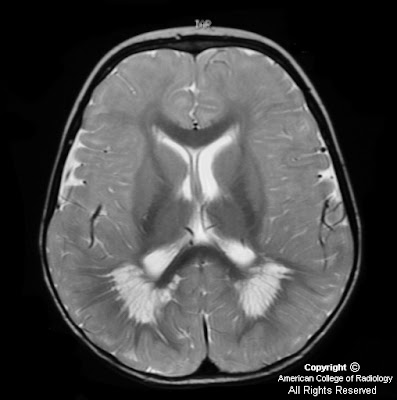 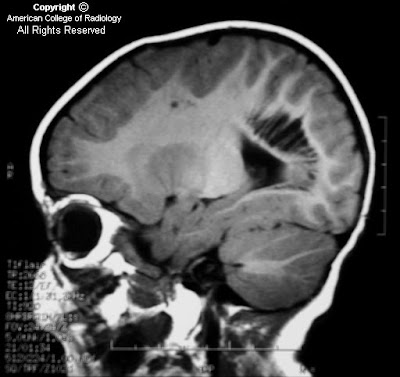 
Mucopolysaccharidoses (MPS) are inherited disorders of metabolism which are characterized by the inability to break down glycosaminoglycan (GAG) because of an enzyme deficiency. This results in an accumulation of toxic intracellular substrate. There are multiple MPS, classified from MPS 1-9, depending upon the specific enzyme deficiency. The prototype is MPS 1H, which is Hurler disease. This is caused by alpha-L-Iduronidase deficiency.

On noncontrast CT there is macrocrania. The dilated perivascular spaces are rarely visible on CT. There is progressive hydrocephalus and atrophy. On contrast enhanced CT there is often enhancing pannus associated with the ligaments and dura at the craniocervical junction.

A classic diagnostic imaging finding on MRI is dilated perivascular spaces (PVS) or Virchow-Robin spaces. This will appear as dark on T1WI and bright on T2WI. The dilated PVS are usually under 5 mm, but can be larger, and range from one to many. The most common locations are the corpus callosum and peritrigonal white matter, but can occur anywhere. On T2WI, there is often increased signal of the white matter surrounding the dilated PVS, which is a result of gliosis, edema, demyelination or dysmyelination. On FLAIR, there may be increased signal surrounding the PVS.
Pubblicato da David Spizzichino a 16:00