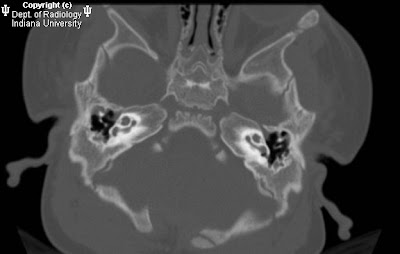 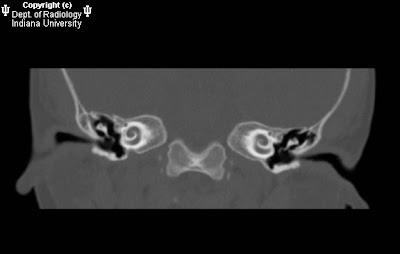 There are focal lytic plaques in the pericochlear bony labyrinth bilaterally. The internal auditory canals and vestibular systems appear normal in size and configuration. Each cochlea completes 2.5 turns. Incidental (unrelated) fluid was seen within the right middle ear and right Prussak’s space as well as the right mastoid air cells.

Cochlear otospongiosisis a primary lytic disease of the endochondral layer of bony labyrinth. Best diagnosed by temporal bone CT.
It is characterized by focal ovoid lytic plaques (aka focal demineralization) in the pericochlear bony labyrinth that can become confluent. The bony labyrinth can have a "halo" appearance with more severe, confluent disease.
As the disease progresses, it can spread to other potions of the labyrinth including the lateral walls of the internal auditory canals.
Cochlear otospongiosis is the less common form (15%). Fenestral otospongiosis far more common (85%).
Fenestral form often coexists with cochlear form but the reverse is not true.
Patients typically present with progressively worsening hearing loss (conductive in fenestral form and mixed conductive and sensorineural in the cochlear form). The cochlear form is bilateral and symmetric in 85% of cases.
The etiology of the disease is unknown as is the exact cause of associated hearing loss. It is postulated that sensorineural hearing loss may result from compromise of the spiral ligament or by protease production that is toxic to cochlear nerve cells.
Early treatment for cochlear form is fluoride. If bilateral and severe disease is present, cochlear implants may be considered.
Pubblicato da David Spizzichino a 16:00