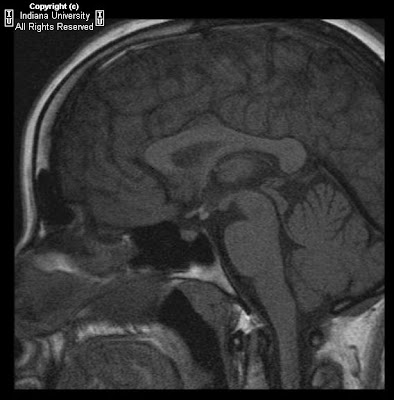 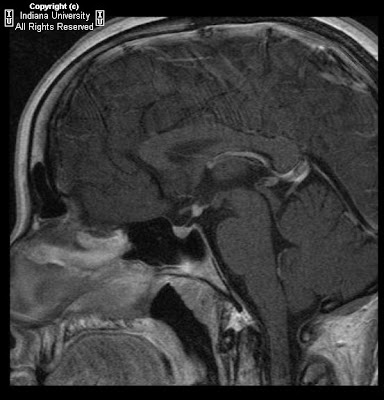 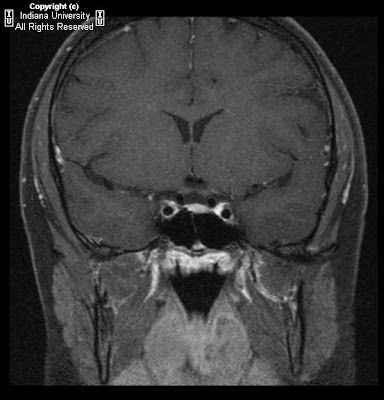 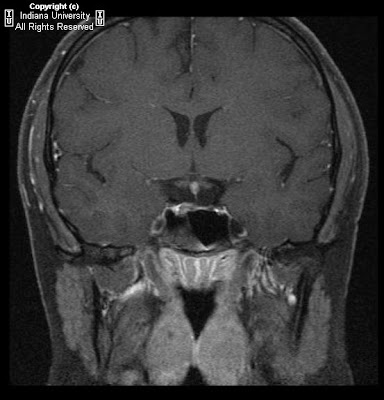 Along the tuber cinereum, a 5 mm hyper intensity is noted on precontrast T1 images. The area shows homogenous, hyper intense signal on post contrast sequences. The pituitary infundibulum is threadlike and midline. The anterior pituitary gland is hypoplastic and located in the sella. It shows homogenous enhancement.

MRI is the imaging modality of choice to study the anatomic relationships that exist in the pituitary-hypothalamic region. Both pre and post contrast T1 weighted images should be obtained. The best imaging planes are sagittal and coronal. Fat suppression imaging can also be useful as the bright signal associated with the posterior pituitary will not typically suppress.

Located in midline at the median eminence, the ectopic posterior pituitary gland will either be T1 hyper intense or isointense on precontrast images. It is posterior and inferior to the optic chiasm. On post contrast images, it will appear hyper intense. The sella will either be hypoplastic or completely absent. Similarly, the anterior pituitary will be hypoplastic or absent. As mentioned above, identifying the presence or absence of the pituitary stalk is important as it correlates with the degree/ type of hormonal abnormality.
Pubblicato da David Spizzichino a 16:00