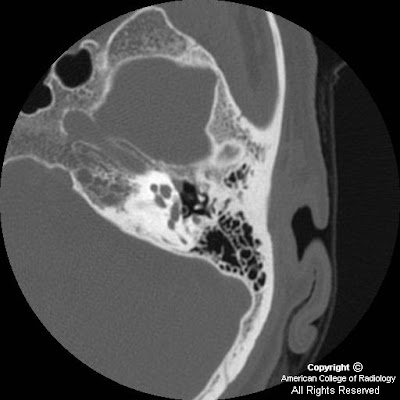 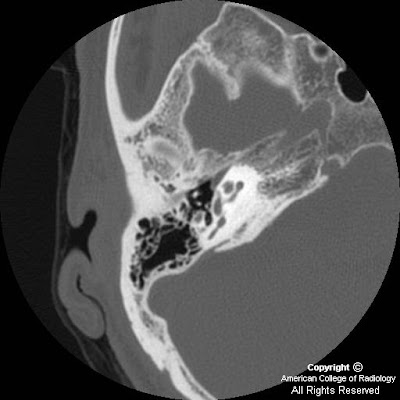 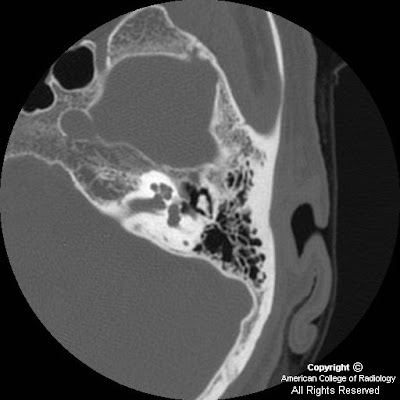 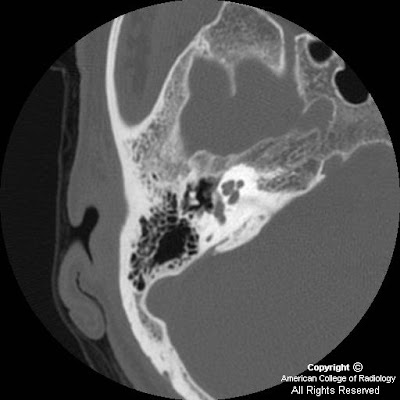 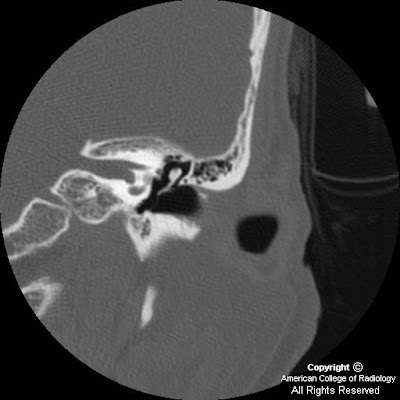 
Otospongiosis is the disease responsible for most adult cases of conductive hearing loss.
Initially starts at the anterior margin of the oval window (fissula ante fenestrum, site of predilection).
The “Schwartze sign” is a vascular hue behind the tympanic membrane seen on otoscopy

Otospongiosis is a primary focal spongifying disease limited to the temporal bones of humans that occurs when the dense, ivorylike endochondral bone is replaced by spongy, highly vascular irregular foci of haversian bone tissue. Lesions can arise in almost any region of the labyrinthine capsule, but about 90% of the time develops in the fissula ante fenestrum. This so-called “area of predilection” is a cleft of fibrocartilaginous tissue just anterior to the oval window.

Otospongiosis is the disease responsible for most adult cases of conductive hearing loss. Clinically, patients present with unexplained bilateral, progressive hearing loss. On otoscopy, clinicians can see a vascular hue behind the tympanic membrane, termed the “Schwartze sign”. Fenestral otospongiosis is limited to the margins of the oval and round windows, causing conductive hearing loss. In rare instances, the disease is diffuse and spreads to the inner ear otic capsule, termed cochlear otospongiosis and causes progressive sensorineural hearing loss. Otospongiosis may be difficult to distinguish from Paget’s disease on histology, however Paget’s disease demonstrates diffuse skull base involvement. Otospongiosis, which describes the active disease process, is a better term than otosclerosis which is the chronic (sclerotic), healing phase.

Noncontrast CT is the primary diagnostic tool and findings include a radiolucent focus seen at the anterior margin of the oval window which spreads through the otic capsule and thickening of the stapes footplate. Treatment includes stapedectomy followed by prosthesis insertion. As the disease progresses to cochlear otosclerosis, rates of success decline.
Pubblicato da David Spizzichino a 16:00