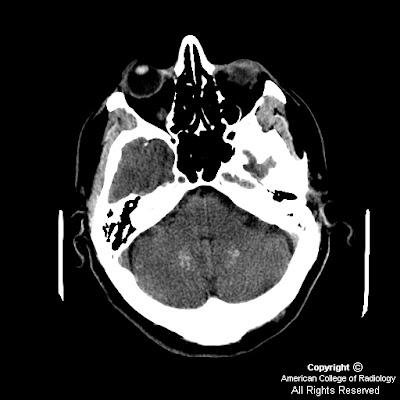 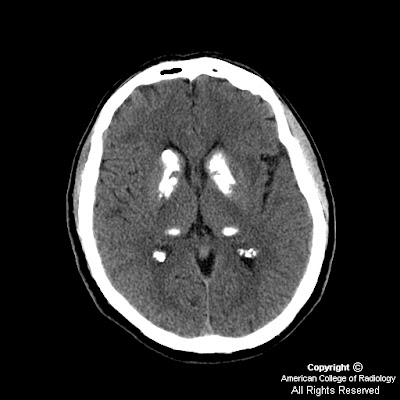 
Most cerebral calcifications are located in the basal ganglia. Additional sites of intracranial calcification include the thalami, dentate nuclei of the cerebellum as well as the subcortical white matter.

The differential diagnostic considerations for basal ganglia calcification are extensive. The most common cause is idiopathic and of no clinical significance, often seen as an incidental finding as in this case. Physiologic calcification occurs with aging and is commonly noted in patients greater than 40 years of age. Thus, biochemical testing is rarely performed unless indicated by additional features. Endocrine disorders such as hypoparathyroidism and hyperparathyroidism also result in intracranial calcification. Other etiologies include metabolic disorders as in Fahr disease (familial cerebral ferrocalcinosis) which is associated with variable neurological manifestations including progressive deterioration of motor function and psychological impairment. Post inflammatory states also account for calcification and may be seen in the setting of infection with neurocysticercosis, tuberculosis or congenital HIV. Traumatic conditions such as birth anoxia, hypoxia, and cardiovascular events may also result in intracranial calcifications. Finally, cases are also seen with toxic poisoning as in chronic lead exposure.

Radiographically, calcification is readily apparent on non-contrast CT examination as high attenuation in the aforementioned structures. As CT easily depicts calcium, this is the preferred modality for localizing and evaluating the extent of calcifications.
Pubblicato da David Spizzichino a 16:00