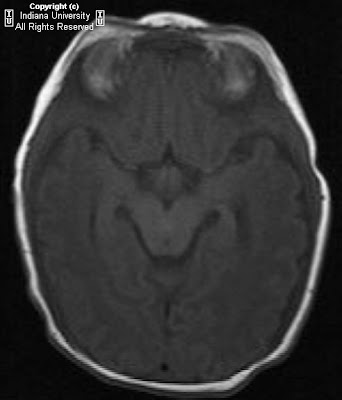 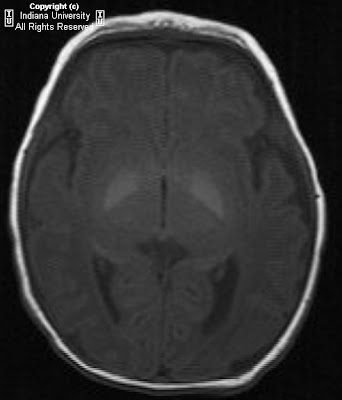 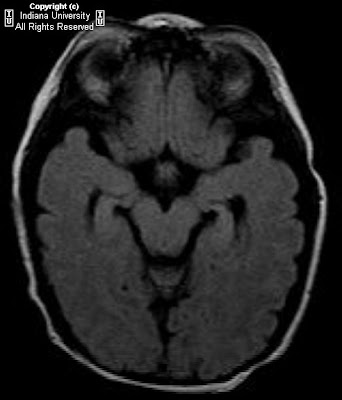 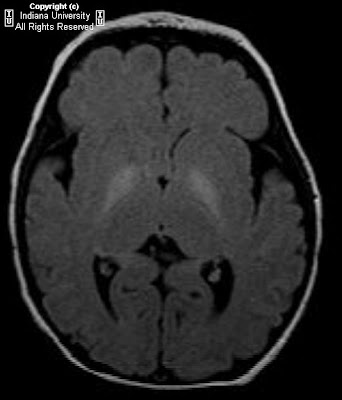 Increased signal intensity on T1 and FLAIR sequences in the bilateral globi pallidi and hippocampi.

Encephalopathy is due to deposition of toxic unconjugated bilirubin in the basal ganglia, hippocampus, substantia nigra, and brainstem nuclei. It is most often caused by hyperbilirubinemia from erythroblastosis fetalis and most commonly seen in premature infants. It is also associated with early discharge from the hospital. Physiologic and breastfeeding jaundice are benign causes of hyperbilirubinemia.
In the absence of hyperbilirubinemia, factors influencing permeability of the blood-brain barrier (e.g., acidosis, infection) and the amount of unbound (versus albumin-bound) bilirubin may play a role.
Bilirubin-induced neurologic dysfunction (BIND) refers to the clinical signs associated with bilirubin toxicity (i.e., hypotonia followed by hypertonia, opisthotonus or retrocollis, or both).
In the acute phase, neurological findings can include decreased alertness, hypotonia, and poor feeding early on. Later, hypertonia of the extensor muscles is a typical sign. Patients present clinically with retrocollis (backward arching of the neck), opisthotonus (backward arching of the back), or both. Infants who progress to this phase develop long-term neurologic deficits. Prognosis is poor once neurological complications develop. Seizures are not a usual presentation.
Chronic sequelae evolve over the first several years of life. They include extrapyramidal, auditory, and visual abnormalities, and cognitive deficits.
Noncontrast MRI is the most useful imaging modality in the acute and chronic phases. CT is not useful.
MR imaging findings in the acute phase include increased T1 signal intensity in the globus pallidus, hippocampus, substantia nigra, and dentate nucleus. T2 signal may be subtly increased.
MR imaging findings in the chronic phase include increased T2 signal in the posteromedial border of the globus pallidus, hippocampi, and occasionally the dentate nucleus. T1 weighted images are normal.
Preventative treatments include phototherapy. Exchange transfusion is indicated for patients with findings of encephalopathy and serum bilirubin levels >25mg/dL with dehydration.
Pubblicato da David Spizzichino a 16:00