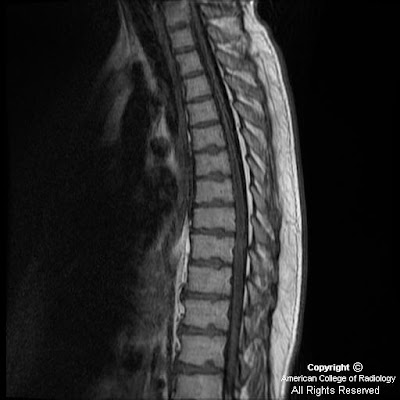 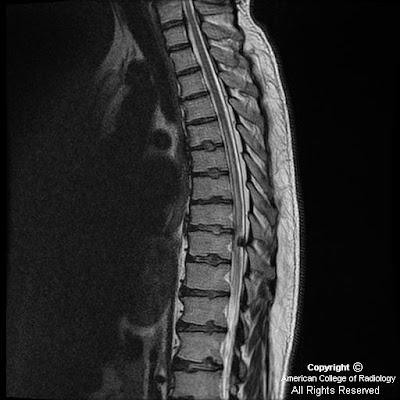 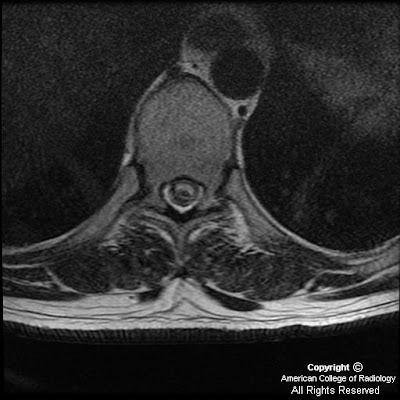 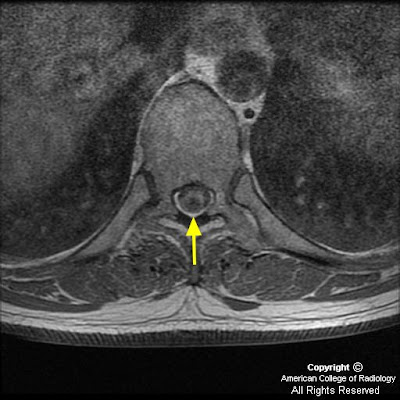 The T2 sagittal and axial images (Figure 2 and Figure 3) show a posterior intradural nodule with low signal intensity which is compressing the spinal cord anteriorly causing cord edema. The sagittal T1 (Figure 1) sequence shows that the nodule is isointense to hypointense which is non specific. It also confirms its extramedullary location.
The axial T1 postcontrast (Figure 4) sequence shows peripheral contrast enhancement with a central hypointense non enhancing area. This could be associated with the presence of central calcification, metal within an inflammatory nodule or the non enhancing central “dot” described in some nerve sheath tumors.


Intradural extramedullary lesions include meningiomas, nerve sheath tumors (schwannomas and neurofibromas), drop metastasis and foreign body granulomas. Meningiomas are globular lesions. They are more common in elderly females. They are usually located in the thoracic region. These tumors are isointense to slightly hypointense on T1. They enhance and can have a dural tail. On T2 they are isointense to hyperintense and can demonstrate low signal on T2 related to intalesional calcification. Meningiomas originate from the denticulate ligament.

Intradural extramedullary metastasis could be the result of drop lesions from primary brain neoplasms such as medulloblastomas or ependymomas or the result of hematogenous spread from solid organ tumors.

Foreign body granulomas are associated with the presence of intrathecal drug delivery pumps more commonly with the administration of opioid derivates or in patients who received agents that were not labeled for long-term intrathecal use. Implanted delivery systems for intrathecal drug administration have become more commonplace in the management of refractory cancer and non-malignant pain. Complications may be related to drug side effects or to technical problems possibly involving the pump and/or catheter

Clues to the diagnosis include the above imaging findings along with the loss of analgesic drug effects accompanied by new, gradually progressive neurological signs and symptoms. Surgery is not always necessary for treatment. Successful resolution has been reported with lower doses and/or changes in the medication delivered.
Pubblicato da David Spizzichino a 16:00