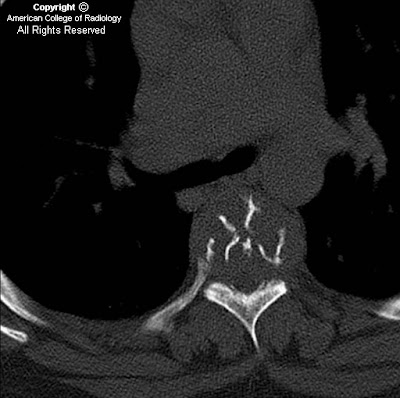 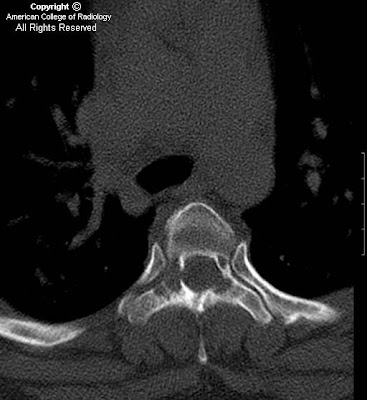 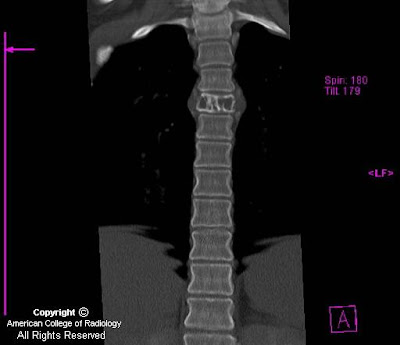 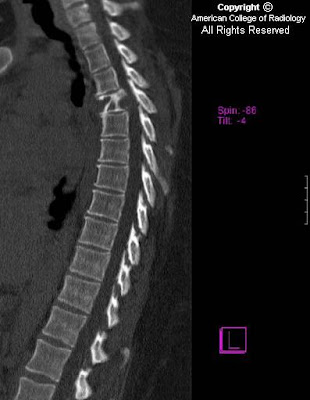 On the non-contrast thoracic spine CT (Figure 1), there is a lytic lesion within the T5 vertebral body, extending into the posterior elements (red arrrow in Figure 2). The lesion is associated with an adjacent soft tissue mass (yellow arrow in Figure 3). The lytic areas have thin sclerotic margins, resulting in a distinctive “soap-bubble” appearance (yellow arrow in Figure 4). There is mild bony expansion of the T5 vertebral body, causing moderate spinal canal stenosis. There is no internal matrix formation, nor is there evidence of periostitis.


An epithelioid hemangioendothelioma (EH) is a rare intermediate-grade neoplasm of the vascular endothelial cells. EH can occur in bones, skin or viscera (liver, lung or spleen). The most common bones to be affected are the tibia (23%), femur (18%), humerus (13%) and vertebral bodies (10%). Rarely, the skull or pelvis may be involved. Osseous EH often demonstrates a regional pattern of involvement and there is frequently more than one lesion found within a single extremity. Osseous EH most often occurs in young patients, typically in the second or third decades of life. Males are affected twice as often as females. Patients usually present with pain and pathologic fractures are present in 10% of cases. If the tumor is located within the spine, the patient may experience neurologic symptoms. Rarely, patients will present with hemolytic anemia or a consumptive coagulopathy.

On radiographs and non-contrast CT, an osseous EH is an osteolytic lesion without matrix mineralization. Osseous EH typically has a lytic bubbly appearance often associated with expansile bony remodeling. There may be cortical break-through or surrounding sclerosis. A periosteal reaction is notably absent unless there is an associated pathologic fracture. An adjacent soft tissue mass may or may not be present. Lesions with ill-defined margins and loss of trabeculae are usually more aggressive in nature than well-circumscribed tumors. Osseous EH most frequently occurs in the tubular bones of the lower extremity and is often multifocal within the extremity. Joint invasion is common. In the spine osseous EH has a distinctive “soap-bubble” appearance with sclerotic margins. When osseous EH occurs in the spine, osteolysis may be present within adjacent vertebral bodies with narrowing of the intervening disc space mimicking osteomyelitis/discitis. If intravenous contrast is administered, EH demonstrates marked homogenous enhancement which is to be expected since it is a vascular tumor. On MRI, EH is generally T1 hypointense, T2 hyperintense, and markedly hypervascular. Osseous EH results in focal uptake on bone scan. Multiple modalities are often needed to assess for multifocal bone or visceral involvement including bone scan, skeletal survey, and CT.

Osseous EH has a wide spectrum of behavior, but is usually locally aggressive. There is a 31% rate of metastatic disease, usually to the lungs or bone. Treatment is surgical excision, either curettage or wide resection, depending on the location and tumor grade. Adjuvant radiation therapy may be employed for aggressive tumors. The role of chemotherapy is controversial. As expected, well-differentiated tumors have a favorable prognosis following resection but high grade tumors have a dismal prognosis. Approximately 13% of tumors will have a local recurrence. The most important predictor for prognostic purposes is associated visceral involvement the presence of which indicates a poor prognosis.
Pubblicato da David Spizzichino a 16:00