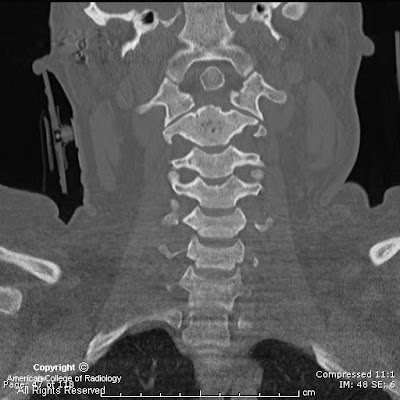 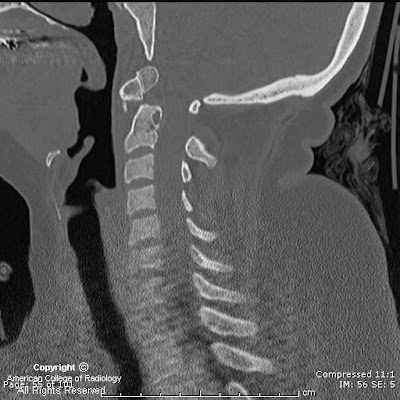 The coronal CT neck image in Figure 1 shows a small, round os odontoideum separated from the body of C2 by a wide radiolucent gap. It has smooth and uniform cortical margins.
The sagittal CT neck image in Figure 2 shows signs of C1 anterior arch hypertrophy. There is no paravertebral swelling. The posterior atlanto-dens interval (PADI) also known as the space available for cord (SAC) is 12mm (less than 13mm has a poor prognosis).

The etiology of os odontoideum is still debated. The leading hypothesis suggests that trauma in early childhood causes injury to the soft tissues between C1 and C2. This is often seen when babies fall from their cribs or toddlers fall from stairs. Radiographic images taken after this injury usually do not show any significant pathology besides retropharyngeal swelling.

Injury results in avascular necrosis of the odontoid process over a period of months or years. Therefore, the cephalad ossification centers do not fuse with the C2 body. With growth, the alar ligaments that attach the tip of the dens to the occiput pull the ossicle upwards giving it its characteristic appearance.

Symptoms are variable with vague pain in the neck and shoulders being the most common. Less commonly reported symptoms include headaches, torticollis, weakness and paresthesias. The most serious complications of an os odontoideum occur when C1-C2 instability causes spinal cord compression or vertebral artery compromise. This may result in brain stem symptoms, quadraparesis, transient bouts of unconsciousness and sudden death.

The best way to evaluate an os odontoideum is by obtaining open-mouth anterior-posterior and flexion-extension lateral plain films. A criteria often used to make the diagnosis is the Posterior AtlantoDens Interval (PADI) also known as the Space Available for Cord (SAC). This is the distance between the posterior border of the dens and the anterior border of the posterior ring of the atlas. A PADI of less than 13mm is associated with neurologic decline. C1-C2 translation of more than 5mm on flexion-extension radiographs also has a poor prognosis.

The most common treatment for a symptomatic os odontoideum is C1-C2 posterior arthrodesis. This is particularly indicated in patients who exhibit signs of cord compression. Medical management is indicated for patients with only mechanical symptoms.
Pubblicato da David Spizzichino a 16:00