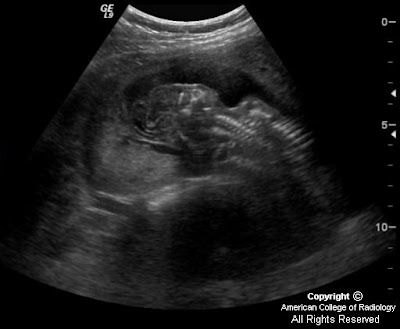 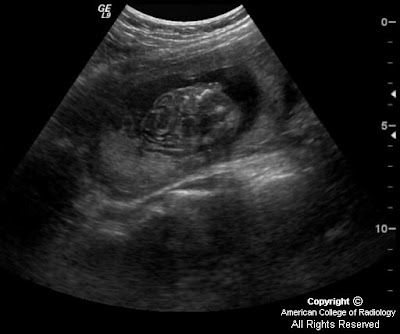 Figure 1 and Figure 2: Coronal and axial ultrasound images of the fetal head show an absent cranial vault and an abundant amorphous mass of brain tissue. Normal cranial vault appears as bright echogenic lines characteristic of bone which is absent here.

Acrania is a rare congenital anomaly in which the flat bones of the cranial vault are partially or completely absent with complete but abnormal development of the cerebral hemispheres. The condition is identified by the absence of the calvarium. The cerebral hemispheres are surrounded by a thin membrane. The demonstration of abundant, abnormal brain tissue on the sonogram helps differentiate cases of acrania from the more common anencephaly.
Acrania is thought to occur because of abnormal migration of mesenchymal tissue, which normally covers the cerebral hemispheres. This faulty migration results in the faulty formation of the cranial bones, muscles, and dura mater. Ossification of the fetal cranium begins and accelerates after 9 weeks. The important ultrasound feature is an absent cranium, which allows diagnosis from 11 weeks onward. At 11-14 weeks gestation, the majority of cranial ossification is in the lateral aspects of the frontal bones and lower parietal bones, and no vault ossification is visible in the midline on a perfect midsagittal image. Misdiagnosis may occur if only midsagittal views of the fetus are obtained. The absence of cranial ossification may not be noted on routine examination, and the head may appear relatively normal. It is important to look specifically for frontal bone ossification in the axial and coronal planes.
The differential diagnosis includes anencephaly, large cephaloceles, hypophosphatasia and osteogenesis imperfecta. Anencephaly and acrania may commonly be confused with each other early in the pregnancy. Typically there is a progression in utero from a relatively normal appearing brain, to an amorphous brain mass, to no recognizable brain tissue which is the key to diagnosis of anencephaly in the second and third trimesters. In the first trimester, the brain of affected fetuses may appear relatively normal or may demonstrate varying degrees of distortion which can lead to confusion of accurate diagnosis. With anencephaly, the cerebral tissue is completely absent. With cephaloceles, the cranial vault can always be detected and a part of the brain is intracranial. Certain conditions such as hypophosphatasia and osteogenesis imperfecta can mimic acrania due to the lack of mineralization of the skull bones. With these conditions the intracranial anatomy is normal and the brain is surrounded by a thick layer of tissue representing soft tissues and unossified bone. Other findings such as bowing, shortening, or fractures of long bones are usually also present and aid in distinction from acrania.
Acrania is a lethal malformation. Antenatal identification allows the clinician to make appropriate and timely management decisions.
Pubblicato da David Spizzichino a 16:00