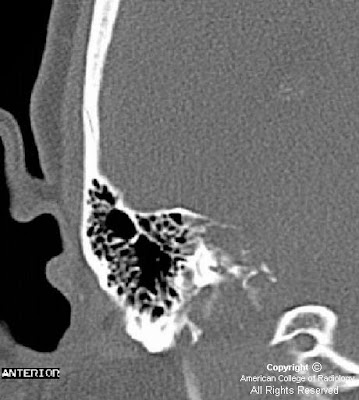 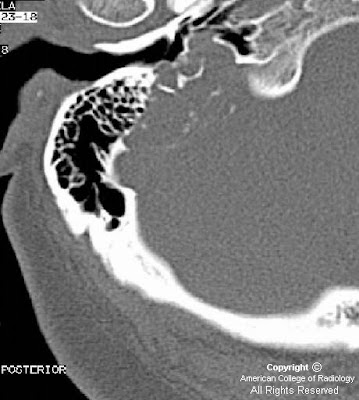 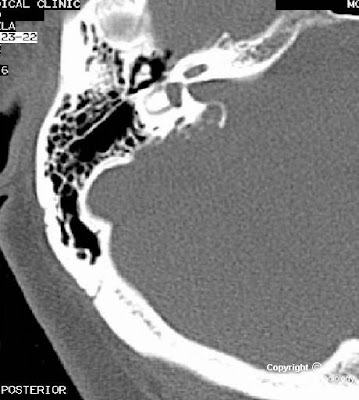 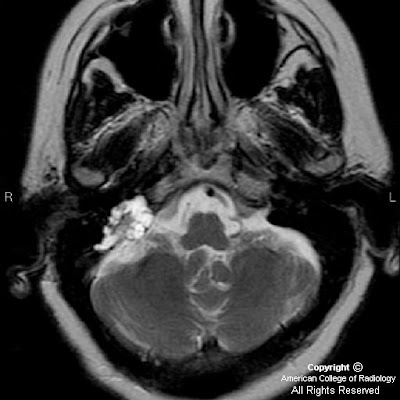 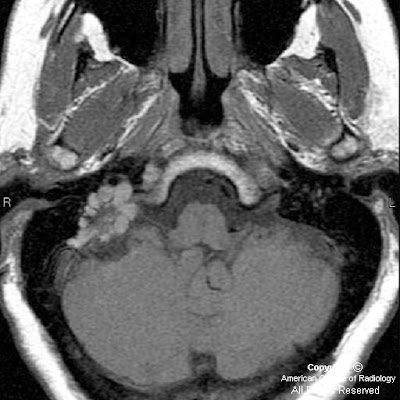 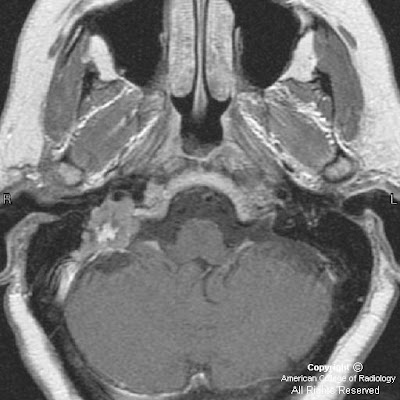 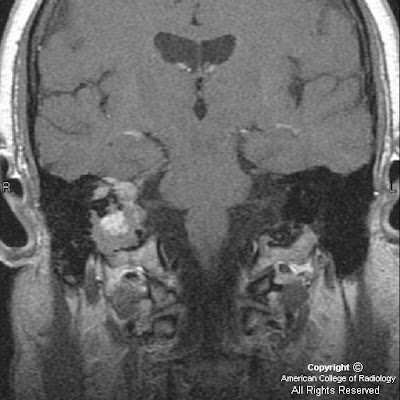 CT images showing an erosive lesion of the right petrous bone, centered at the right vestibular aqueduct opening (endolymphatic sac). The lesion is eroding the posteriolateral wall of the jugular fossa. There is also erosion of the posterior wall of the right IAC, however the right IAC itself is still intact. There are scattered bony spicules seen within the lesion.
Axial T1 and axial T2 precontrast images, respectively, at the level of cerebellopontine angle. There is a hyperintense multilobulated lesion occupying the right endolymphatic sac space. There is also a central area of low signal intensity which enhances post-gadolinium.
T1-weighted post-gadolinium axial and coronal images, respectively. There is a central area of enhancement indicating hypervascularity. Low-signal intensities within the lesion represent intratumoral bony spicules.


The endolymphatic sac is part of the membranous labyrinth derived from the neuroectoderm and located within the petrous portion of the temporal bone where it also contacts the dura. Endolymphatic sac tumors (ELST) were described in 1989 by Heffner as a unique pathologic entity originating from the epithelium of the endolymphatic sac, specifically the rugose or middle portion of the sac. ELST histology is benign and exhibits two patterns; mixed type and papillary adenomatous type. The former is generally confined while the latter demonstrates a more aggressive nature by locally invading the temporal bone. Patients most often present with sensorineural hearing loss and may also present with tinnitus, facial nerve palsy or vestibular dysfunction. ELST is a rare skull base lesion and most lesions are sporadic. However, there is an increased incidence seen in patients with von Hippel-Lindau disease (vHL), 7% of whom are diagnosed with this lesion. If ELST is seen bilaterally, vHL becomes a likely diagnosis.

ELST is a slow growing lesion which erodes the temporal bone and often presents with intratumoral bony spicules. In addition, due to the tumor’s slow growth, the petrous bone cortex expands and surrounds the lesion with a thin shell of reactive bone. The lesion may also exhibit hypervascularization, usually from a branch of the external carotid artery.

CT may show a soft tissue mass in the endolymphatic sac between the sigmoid sinus and internal auditory meatus. On MR imaging, this lesion exhibits a hyperintense focus on T1WI with an inhomogeneous signal on T2WI. Focal low signal intensities within the lesion represent bony fragments. Tumor foci may enhance on T1WI with gadolinium due to hypervascularity. Advanced lesions may spread far, making it difficult to identify the origin of the tumor and expanding the differential. Treatment is surgical resection.
Pubblicato da David Spizzichino a 16:00