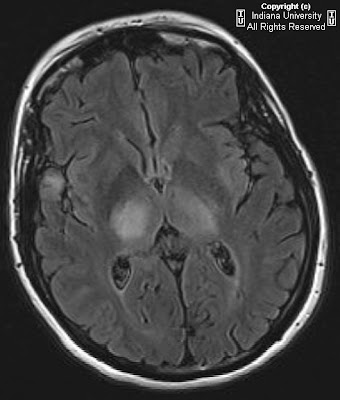 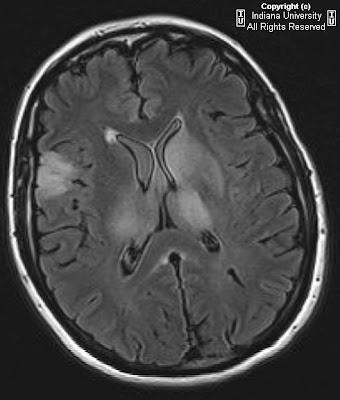 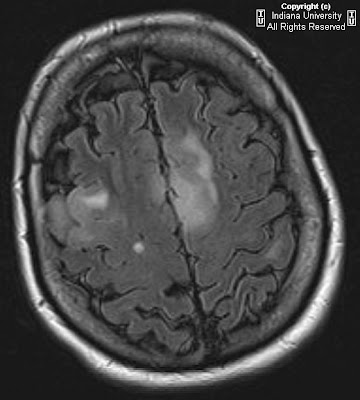 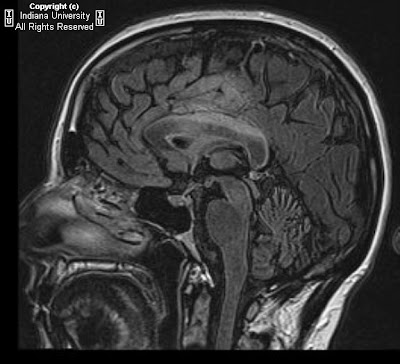 There is patchy T2 prolongation involving the thalami, basal ganglia, and scattered areas of white matter and cortex. There was no diffusion restriction or abnormal contrast enhancement.

Acute disseminated encephalomyelitis (ADEM) is an acute, monophasic demyelinating disease. It is similar to multiple sclerosis in its clinical and pathologic features. It is most commonly seen in children, but can be seen at any age. It is likely of autoimmune etiology and typically follows vaccination or viral infection. ADEM occurs most commonly from October to March. Pathogenesis likely involves T helper cells sensitized to auto antigens, such as myelin protein. Symptoms include fever, headache, and meningeal signs. Seizures, focal neurologic deficits, stupor, and coma may develop. ADEM is often clinically distinct from MS in its association with viral exposure, presence of constitutional symptoms, presence of cortical signs, and lack of posterior column abnormalities. CSF analysis is crucial to the diagnosis.

Treatment includes steroids and full recovery is possibly if treated early. Mortality was as high as 10% to 20% although this data was obtained prior to modern ICU technology.

Acute hemorrhagic leukoencephalitis is a severe variant of ADEM that is often fatal. Pathologically, there is perivascular hemorrhagic necrosis, primarily in the centrum semiovale. The major imaging feature is a rapid progression of white matter lesions over the course of a few days.

CT scan is relatively insensitive, but may show scattered low density areas. T2WI and FLAIR usually show multiple regions of hyper intensity at the gray-white junction, in the brainstem, cerebellum, and basal ganglia. Optic neuritis is also common. Solid or ring enhancement can be seen. There can be variable diffusion restriction. There can be high signal on ADC maps in regions of demyelination. Spectroscopy can show low NAA. Imaging findings can lag behind clinical condition during both onset and resolution. The lesions regress with successful treatment, correlating with clinical improvement. Imaging findings are rarely pathognomonic.