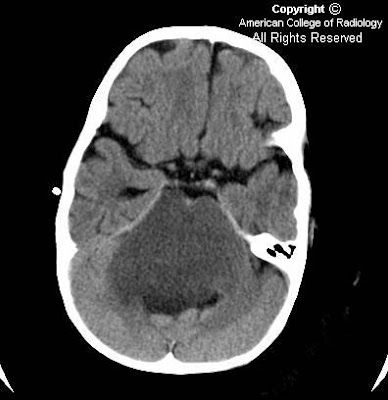 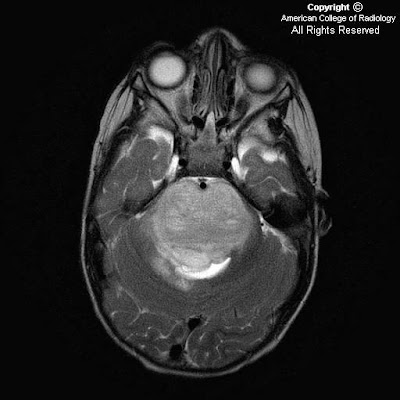 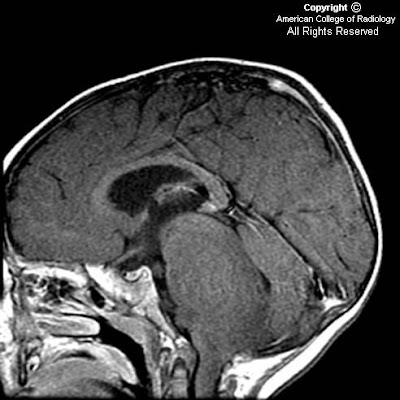 Patients with NF1 have a higher incidence of brain tumors, with the brainstem commonly involved. Although the imaging appearance of these tumors is similar, they often have a relatively indolent clinical course.

Brainstem gliomas constitute about 15% of all pediatric CNS tumors with peak incidence between 3 and 10 years old. These are heterogeneous groups of tumors that may be diffuse, focal, dorsally exophytic, or cervicomedullary. These tumors commonly present with symptoms of double vision, weakness, unsteady gait, difficulty in swallowing, headache, dysarthria, nausea, and vomiting. Rarely, behavioral changes and seizures may also be seen in children with this tumor. Although no definite familial tendency is known, there is an increased incidence of brainstem gliomas in patients with neurofibromatosis Type 1.

Magnetic resonance imaging has emerged as the primary diagnostic modality for brainstem gliomas. MRI multiplanar images assist in the establishment of the tumor diagnosis, identification of tumor epicenter, and prediction of its biological behavior. Diffuse neoplasms tend to smoothly enlarge the affected area without focal areas of exophytic tumor. They are generally poorly marginated and involve more than 50% of the brainstem in the axial plane at the level of maximal involvement. Minimal or no contrast enhancement is seen after gadolinium, although enhancement is commonly seen after radiation therapy. It is difficult to biopsy these lesions because of the proximity of vital structures and thus imaging plays a crucial role in the diagnosis. Focal tumors are generally well marginated and involve less than 50% of brainstem in the axial plane. Focal neoplasms often enhance and have a better prognosis in general than diffuse neoplasms.

Diffuse gliomas are unfortunately the most common brainstem lesions, and they have the worst prognosis among the brainstem gliomas. Radiation and/or chemotherapy are the current mainstays of treatment for diffuse brainstem gliomas. The majority of focal neoplasms are amenable to surgery and longer survival.
Pubblicato da David Spizzichino a 16:00