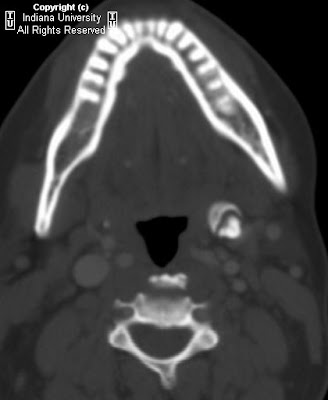 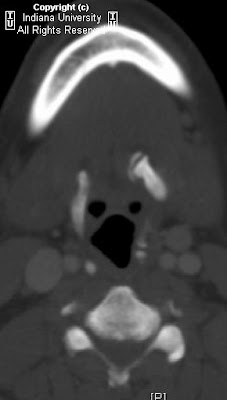 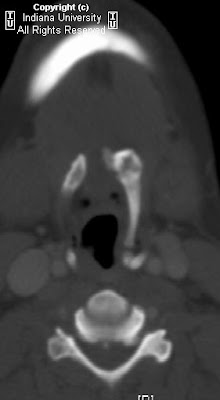 There is ossification and pseudoarticulation of the stylohyoid ligaments bilaterally, left greater than right (on these image focusing on the left side).

Eagle’s syndrome is characterized by craniofacial or cervical pain due to an elongated styloid process or calcified stylohyoid ligament.
Eagle's Syndrome is due to elongation of the styloid process > 30 mm.
4% of the general population has elongation of the styloid process, but only 4% of this group have symptoms of Eagle's Syndrome.
Most common symptom is vague neck pain (41%), however other symptoms include foreign body sensation, throat pain, odynophagia, and pain upon changing head position.
Pain can be due to nerve compression (glossopharyngeal, vagus, or trigeminal), impingement on the carotid vessels, degenerative changes at the stylohyoid ligament insertion site, or rheumatic styloiditis from infection.
There is a 3:1 female preponderence, and most present between age 30 and 40.
Etiology is debated, but some have suggested prior trauma (e.g., tonsillectomy), congenital elongation, ossification of the stylohyoid ligament, and elongation at the cartilaginous junction of the tympanohyale and stylohyoid.
Surgical shortening is the best treatment, and the procedure can easily be performed intra- or extra- orally. Conservative management with local anesthesia or oral analgesia generally fails.
Pubblicato da David Spizzichino a 16:00