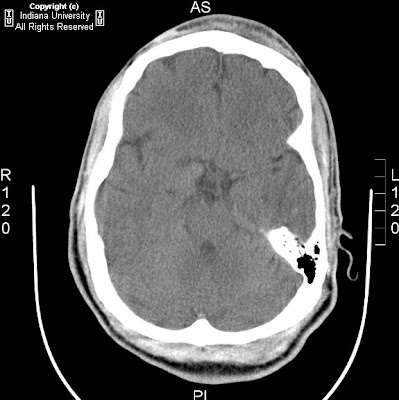 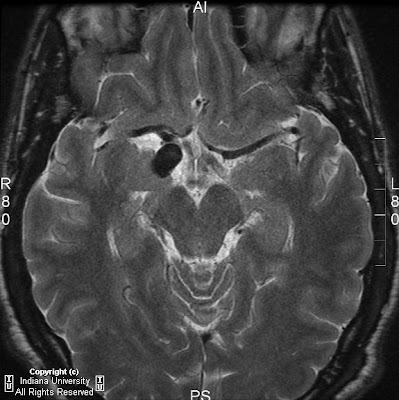 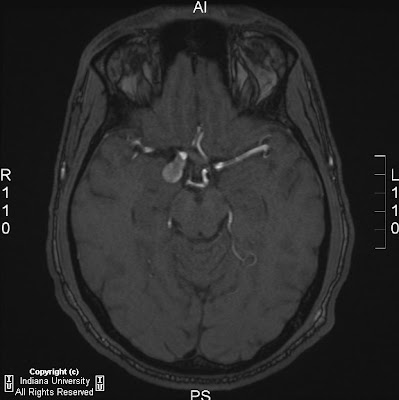 An aneurysm is a focal dilatation of an artery that involves the intima and adventia of the wall. Most aneurysms are saccular (round or lobulated) and occur at arterial bifurcations, postulated to be the result of congenital defects or degenerative changes the vessel wall. More than 90% of saccular aneurysms occur in the anterior circulation, with 30-35% occurring at the anterior communicating artery, 30-35% occurring at the posterior communicating artery, and 20% occurring at the middle cerebral artery. Approximately 10% of saccular aneurysms occur at the posterior or vertebrobasilar artery locations.

Giant aneurysms are defined as those greater than 2.5 cm. in diameter. They account for 5-13% of all intracranial aneurysms, most commonly seen in women by a ratio of 3:1. They are usually multilayered with thrombus of varying age. They usually have a residual patent lumen.

In general, the larger the aneurysm and the older the patient, the more likely to rupture with a cumulative risk of 1% per year. Mortality is approximately 50%. If untreated, 50% re-bleed within 6 months.

Angiography remains the "gold standard.", however MR angiography is playing an increasingly important role. The entire intracranial circulation must be studied because of the 15-20% incidence of multiple aneurysms.
2-5 % of patients with SAH will have a normal initial angiogram. Of these, 10-20% will demonstrate an aneurysm on a second angiogram.
CT can detect aneurysms as small as 3-5 mm. as an intensely enhancing residual lumen often with a peripheral rim of calcification.
MRI and MRA is being used increasingly and can detect aneurysms as small as 3-4mm. The most sensitive MR sequence for detection of SAH is FLAIR.

The appearance of giant aneurysms on MR results from their multi-layered structure. On spin echo images, the residual lumen creates a flow void. Slowly flowing blood may demonstrate a high signal. The thrombosed portion resembles multilayered intracranial hematomas with layers of varying signal intensity depending on the state of hemoglobin. However, the high signal ring tends to be central rather than peripheral because methemoglobin formation is optimal adjacent to the flowing oxygenated blood.
Pubblicato da David Spizzichino a 16:00