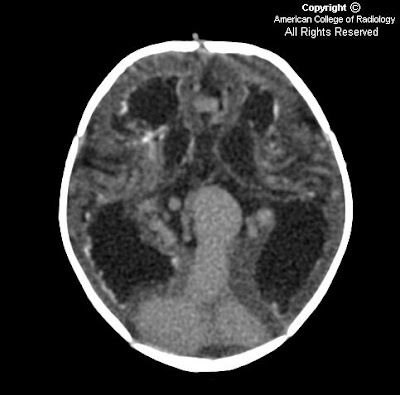 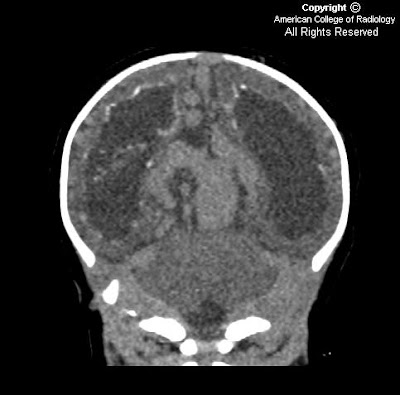 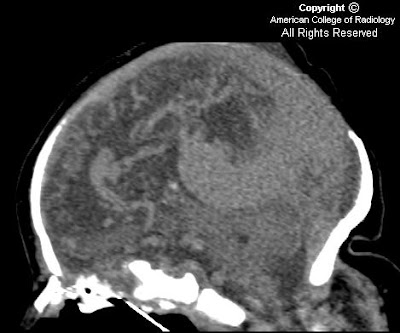 The contrast-enhanced CT demonstrates a markedly dilated venous system on the axial view (Figure 1), including the Vein of Galen and the straight sinus, along with the torcular herophili. The ventricles are dilated and there are periventricular calcifications consistent with ischemic insults and/or thrombosed and calcified feeding vessels. The coronal view (Figure 2) demonstrates dilated jugular veins within the upper neck. The sagittal image demonstrates anterior displacement and mass effect (Figure 3) on the region of the superior cerebral aqueduct by the Vein of Galen.


A Vein of Galen aneurysm is a rare congenital abnormality that is a misnomer. The “aneurysm” is actually one of a variety of arteriovenous malformations of the intracranial circulation with the Vein of Galen portion of the malformation more accurately described as a varix. These malformations are thought to result secondary to persistence of embryonic venous precursors involving the median vein of prosencephalon. There are multiple classification systems for Vein of Galen malformations (VOGM’s). Lasjaunias developed one of the most commonly used systems which divides the malformations into choroidal and mural subtypes. The choroidal subtype is characterized by multiple feeding vessels from the posterior choroidal and adjacent midbrain thalamoperforating arteries. The arterial feeders typically converge on a fistulous site anterior to the median vein and demonstrate a complex arterial maze which mimics a true AVM. The AVM nidus is usually near the thalamus or brainstem. Mural lesions are characterized by a fistulae in the wall of the median prosencephalic vein. Mural lesions typically have fewer feeding arteries and are less associated with heart failure and more commonly associated with delayed presentation. The Vein of Galen malformations (VOGMs) are rare anomalies which constitute 1% of all intracranial vascular malformations but represent 30% of vascular malformations in the pediatric age group.

The clinical presentation of Vein of Galen aneurysms depends on the age of presentation. Neonates classically present with high output cardiac failure. The steal phenomenon which occurs due to the fistulous connections can result in varying degrees of brain parenchymal loss. Neonates can also present with hydrocephalus and macrocephaly. Infants and older children usually present with developmental delay, ocular symptoms, and symptoms related to hydrocephalus. Focal neurologic deficits, seizures and hemorrhage can be seen at any age. Ultrasound is usually the first choice imaging modality and the diagnosis can be made prenatally by demonstrating a cystic structure posterior to the third ventricle with flow demonstrated on Doppler imaging. Contrast enhanced CT can aid in the diagnosis postnatally by demonstrating the anatomy. CT helps quantify cerebral parenchymal damage and ischemic changes that are manifested by encephalomalacia and parenchymal calcifications. Calcification of the aneurysm sac can be seen with delayed presentation, usually beyond 15 years of age. MRI is helpful in demonstrating the vascular anatomy and parenchymal damage present. Angiography is the gold standard with superior definition of small arterial feeders and also provides the vector for endovascular treatment.

Treatment of Vein of Galen aneurysms has evolved over the years, although there still is no simple cure. Surgery has traditionally been the mainstay treatment with overall dismal outcomes. Even with the recent advancements of microneurosurgery, the results have been dissatisfying with a reported mortality rate of almost 90% after surgery in neonates. Endovascular therapy has been proposed for some time, but only recently have technological advancements allowed subselective embolization of the inherently tortuous vessels. A number of temporary and permanent embolization agents have been used including various types of coils and acrylic agents. These have been used with varying success in venous, arterial, and combination approaches. There is some indication that staged arterial embolization of the AVM may be the most successful approach.
Pubblicato da David Spizzichino a 16:00