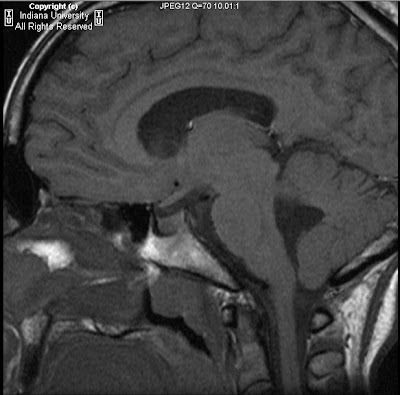 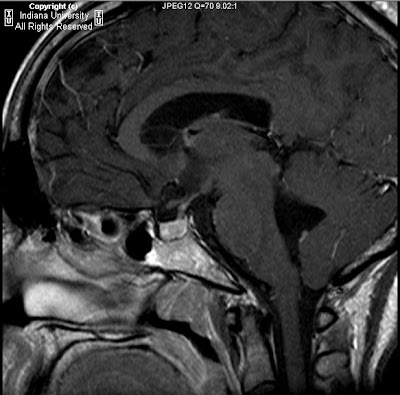 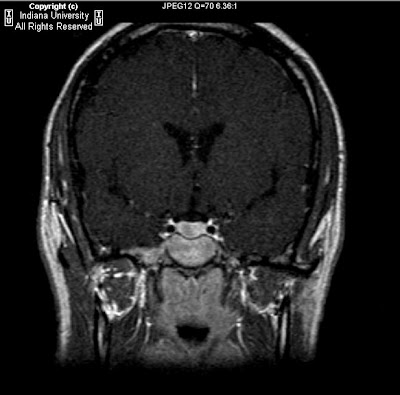 Differential diagnosis: None in this case. Findings are diagnostic of a pituitary microadenoma (prolactinoma).


Pituitary microadenomas are defined as less than 10 mm in diameter.
Pituitary macroadenomas are larger than 10 mm and are often associated with symptoms secondary to mass effect or hemorrhage:
- Mass effect can compresses the optic chiasm giving bitemporal hemianopsia.
- Invasion of the cavernous sinus can cause other cranial neuropathies.
- Inferior breakdown of the sella can cause CSF rhinorrhea.

75% of pituitary adenomas have elevated hormonal secretion, most commonly prolactin.
CT can show the mass if the lesion is large. Sella enlargement and erosion can also be seen.
MR is the imaging modality of choice. Microadenomas are hypointense on precontrast T1 images, hypoenhance compared to the remainder of the pituitary gland on early post contrast images, and show delayed enhancement greater than the remainder of the gland. T2 characteristics are variable. With larger lesions, MR can define mass extent including cavernous sinus invasion and hemorrhage.
Prolactin secreting microadenomas are most often treated medically with bromocriptine.
Pubblicato da David Spizzichino a 16:00