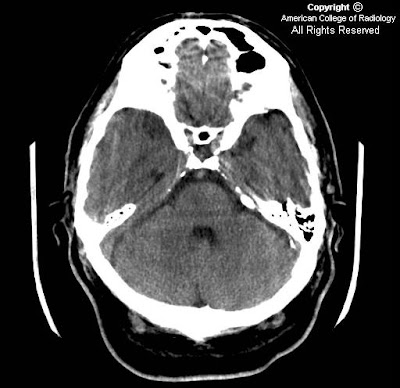 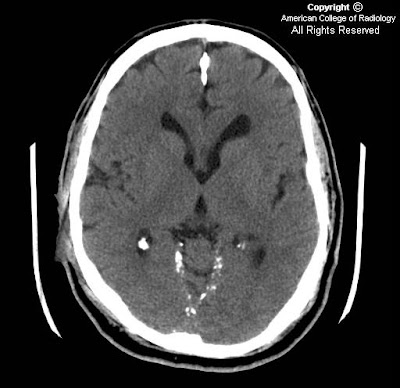 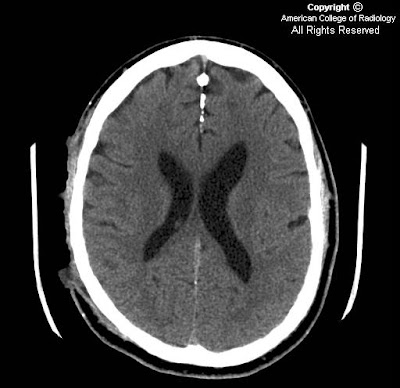 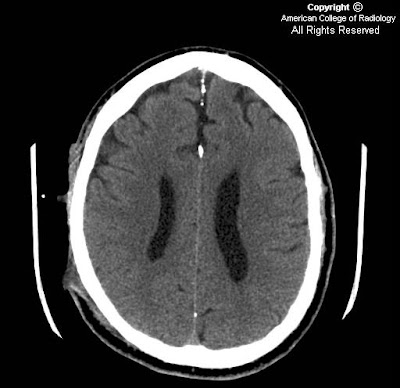 Figure 1: Characteristic calcification of the petroclinoid ligaments and the diaphragma sellae is present.
Figure 2: In addition, there are dural calcifications involving the falx cerebri and tentorium cerebelli.
Figure 3: Soft tissue lesion involving the right scalp is also visualized and corresponds to pathologically proven basal cell carcinoma.
Figure 4: There is subtle parallel orientation of the bodies of the lateral ventricles that suggests dysgenesis of the corpus callosum, a finding that may occur in as many as 10% of patients with NBCCS.


NBCCS (Gorlin syndrome) is a rare autosomal dominant disorder characterized by multiple basal cell carcinomas, odontogenic keratocysts of the jaw, palmar/plantar pits, calcification of the falx cerebri, and rib and spine anomalies. Patients with NBCCS have a propensity to develop multiple neoplasms such as basal cell carcinoma (>90%), medulloblastoma (10%), meningioma, and ovarian or cardiac fibromas.

Radiologic evaluation is important in patients suspected of having NBCCS because the identification of a pathogenic mutation is not always possible, and the clinical manifestations may be subtle, especially in children or African Americans. Recognition is also clinically important as these patients are sensitive to ionizing radiation and have been known to develop iatrogenic malignancy as a result of radiation therapy.