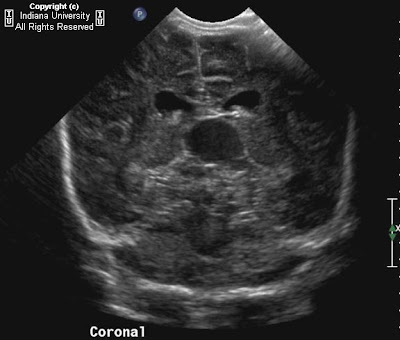 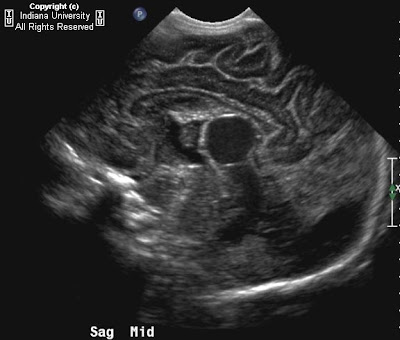 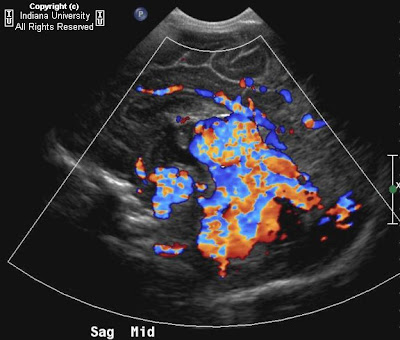 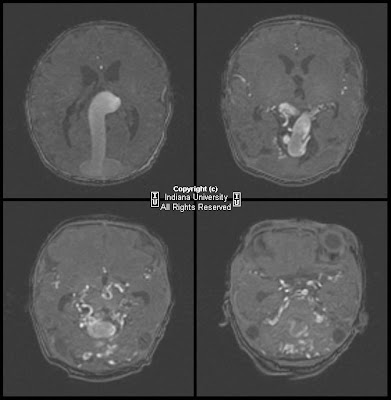 Vein of Galen "aneurysm" is actually an AVM with an associated varix of the vein of Galen.

Vein of Galen AVM is the result of a developmental malformation that involves the vein of Galen. It is an A-V shunt in the wall of an embryologic venous precursor (Median Vein of the Prosencephalon [MVP]) and in this situation a normal vein of Galen does not exist and is replaced by a persistent MVP. The MVP does not drain normal brain tissue. In other words, a Vein of Galen AVM is not anatomically associated with a parenchymal AVM. The dilated MVP drains via the dural sinuses. Vein of Galen AVM presents in infancy with high output cardiac failure and macrocephaly. The A-V fistulas may be single or multiple. Intrauterine diagnosis is usually possible by doppler. Intracranial hemorrhage is rare.

Vein of Galen AVM should be differentiated from aneurysmal dilatation of the vein of Galen which occurs in association with a parenchymal AVM or the rare asymptomatic varicose vein of Galen.

Therapy: Endovascular embolization via an arterial or venous access.

Transcranial doppler sonogram shows an anechoic structure in the superoposterior aspect of the third ventricle with flow.
CT, MRI and MRA show the vascular abnormality and assess the brain parenchyma for abnormalities.
Conventional angiography is essential to assess the malformation and to plan the therapy.
Pubblicato da David Spizzichino a 16:00