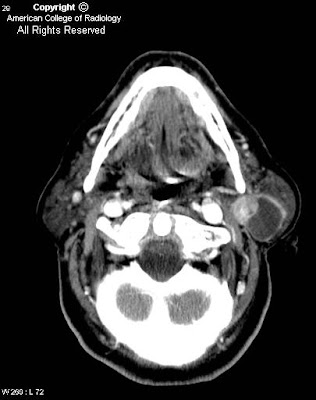 
Also known as papillary cystadenoma lymphomatosum, Warthin’s tumors exhibit a slight male predominence and most commonly occur in patients older than 50. The majority of cases are seen in patients in their seventh to eighth decade of life. They are the second most common benign parotid tumor next to pleomorphic adenoma (approximately 75% to 80% of benign parotid tumors are pleomorphic adenoma). Smokers have an eightfold increased risk of developing this tumor, which likely accounts for the historic male predominance. Warthin's tumors are the most common bilateral parotid tumors. About 6% to 10% of patients will have bilateral tumors. They most commonly arise in the tail of the parotid gland, usually presenting as painless and slow-growing masses. There is a very low incidence of malignant transformation.

Typical CT characteristics include a small, ovoid, well-circumscribed, smoothly marginated mass of the posterior parotid gland. The tumor can be cystic or lymphoma-like in appearance. Warthin’s tumors often present as homogeneous soft tissue densities. Cyst formation is common, and the classic appearance is of a cystic lesion with focal tumor nodule(s). On T1-weighted MR, the mass contrasts to the hyperintense signal of the normal parotid gland. On T2WI, Warthin’s tumors are often heterogeneous, with variable signal intensity. Warthin’s tumors show significant uptake of Technetium 99m pertechnetate, as does oncocytoma.