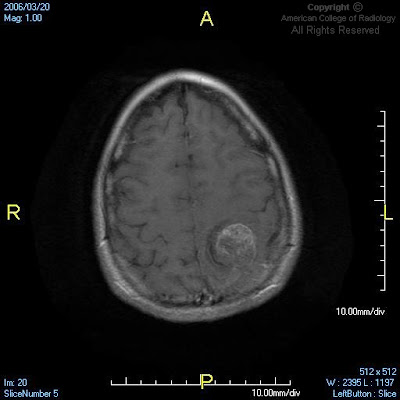 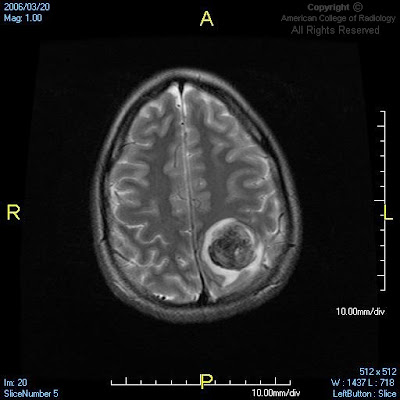 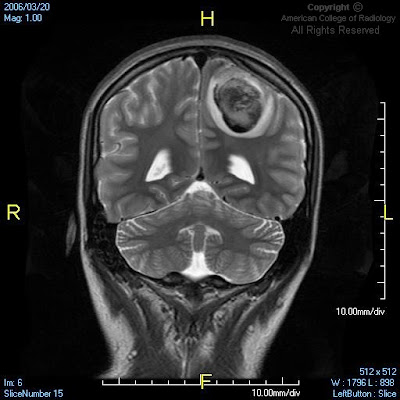 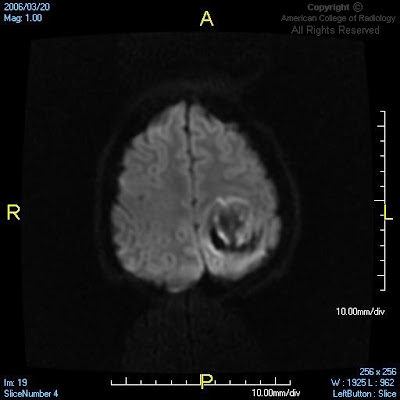 There is a mass in the left anterior parietal lobe measuring 3.2 x 3.0 cm in maximum transverse dimensions. The mass is heterogeneous and demonstrates a central area of increased T1 signal. There is minimal surrounding edema. Mild peripheral heterogeneous enhancement is evident on the T1-weighted sequence.
There is a large mass in the left parietal lobe on the Axial T1 FLAIR with contrast image (Figure 1) that demonstrates heterogenous enhancement. The red arrow demonstrates the left central sulcus.
There is a large, complex, hemispheric mass with minimal peritumoral edema on the Axial T2 FRFSE image (Figure 3).
The green arrows on the axial diffusion-weighted image (Figure 4) demonstrate areas of increased signal (resticted diffusion) centrally within the mass.


Primitive neuroectodermal tumors (PNETs) are differentiated by the anatomical location. The most common location for a PNET is in the posterior fossa and is called a medulloblastoma (MB). PNETs found anywhere else in the brain are considered supratentorial primitive neuroectodermal tumors (S-PNETs). The histological appearance of medulloblastomas and S-PNETs are identical, with medulloblastomas having a better prognosis than S-PNET. (S-PNET > 30-35% 5 year survival; medulloblastoma > 80-85% 5-year survival). Critical survival factors include absence of metastases, patient age > 2 years, and smaller, solid tumors as necrosis suggest a worse prognosis.

Supratentorial primitive neuroectodermal tumors (S-PNETs) are rare tumors accounting for less than 1% of all primary CNS tumors and are more commonly found in young children in the first five years of life. According to the WHO classification, S-PNET is defined as an embyronal tumor in the cerebrum or suprasellar region consisting of undifferentiated or poorly differentiated neuroepithelial cells that display or have the potential for divergent differentiation.

S-PNETs do not have a specific clinical presentation but vary with the size and location of the tumor. Clinical presentation varies from seizures, to motor deficits, to visual disturbances. Paresis and seizures can occur when the tumor involves the cortex. Headaches, nausea, and vomiting are symptoms of increased intracranial pressure seen when the flow of CSF is obstructed. Endocrinopathies or visual deficits may result from suprasellar tumors. S-PNETs can be found in the pineal region, where they cause ventricular obstruction and gaze/convergence difficulties; in the cerebral hemispheres, where they are usually larger at the time of diagnosis with a mean diameter of approximately 5 cm; or in the suprasellar region, where they tend to be smaller due to neuroendocrine and visual disturbances.
Pubblicato da David Spizzichino a 16:00