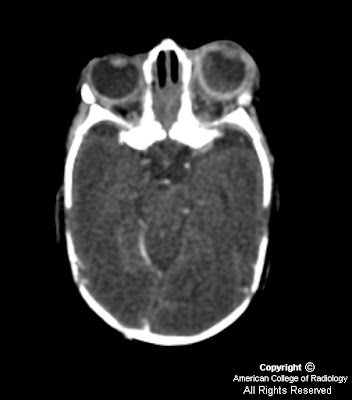 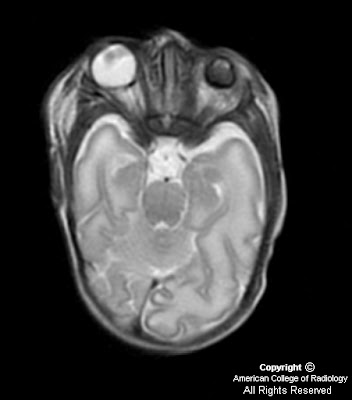 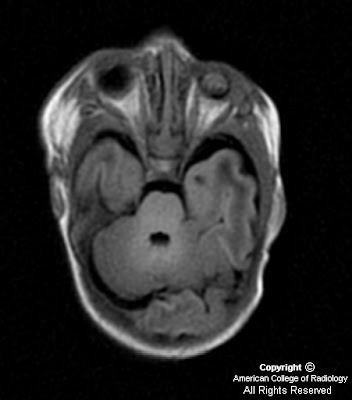 Figure 1: Axial CT with contrast in this infant with meningitis shows proptosis on the left, a large globe, scleral enhancement, and dirty retrobulbar fat consistent with endophthalmitis and retroglobar infection.
Figure 2: MRI T2-weighted sequence obtained one month later demonstrates a small shrunken calficified globe, consistent with phthisis bulbi which has progressed since the prior examination. This is phthisis bulbi as a sequela of infection.
Figure 3: FLAIR image demonstrates bright signal in the left globe as compared with the normal low signal in the right globe related to fluid.


There is a predisposition to endophthalmitis seen in diabetics, patients with debilitating diseases or the immmunosuppressed. Once the intraocular infection is established, exudates are deposited in the vitreous humor along with inflammatory cell infiltration of the global wall (the sclera, choroid and retina).

Phthisis bulbi is a retracted, scarred shrunken globe. It may be the end result of infection (as in our patient), noninfectious inflammation, radiation, trauma or other insult. The globe is usually one half to one third the size of the normal size due to reduced aqueous production. Furthermore, the globe has a diffuse increase in density and demonstrates an irregular contour. There are diffuse calcifications, either mottled or linear within the globe and there may be ossification of the devitalized tissue. The separate structures within the globe are often distorted and cannot be discerned. There is frequently associated atrophy of the optic nerve. Blindness and shrinkage of the globe may occur even with aggressive intraocular injection of antibiotics.

CT is the modality of choice for demonstrating the soft tissue abnormalities and possible calcification of phthisis bulbi. Enhancement of the vitreous humor may indicate that the humor is the initial site of involvement.
Pubblicato da David Spizzichino a 16:00