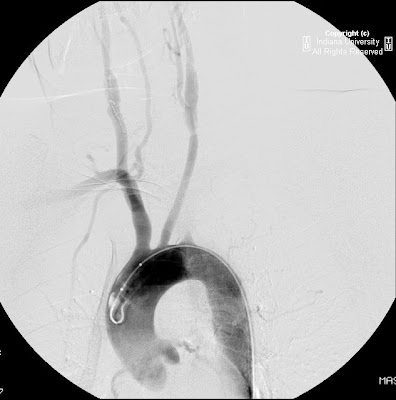 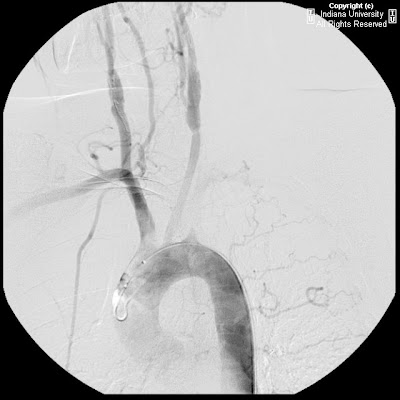 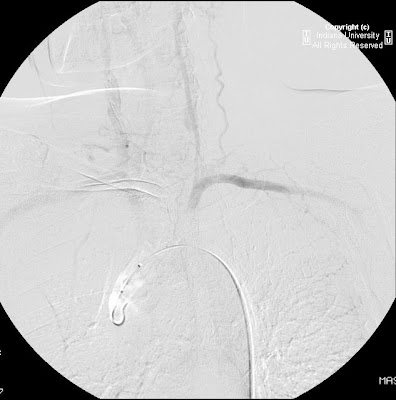 Arteriogram demonstrates occlusion of the left subclavian artery origin with reconstitution of flow after approximately a 1-cm segment via the left vertebral artery. Findings are consistent with subclavian steal syndrome. The peripheral left common carotid artery has an approximately 40% diameter stenosis at the operative site.


Definition: Stenosis/obstruction of the subclavian artery near its origin with demonstration of ipsilateral vertebral artery flow reversal, compromising cerebral flow.
This can be either congenital or acquired secondary to atherosclerotic disease most often. Other causes of acquired steal can be secondary to trauma, embolism, tumor thrombosis, dissecting aneurysm, radiation, inflammatory arteritis, or ligation.
Incidence is 2.5% of all occlusions of extracranial arteries. Associated with additional lesions 81% of the time.
Males affected more often than females 3:1. Left-sided more often than right 3:1.

Angiographic studies show the occlusion/stenosis of the subclavian artery and can demonstrate the retrograde vertebral artery flow.
Color Doppler studies can demonstrate the reversal of the vertebral artery flow.
Treatment is surgical bypass or PTA
Occult subclavian steal syndrome is when the flow reversal can only be seen after maneuvers like ipsilateral arm exercise or inflation of blood pressure cuff.
Partial subclavian steal syndrome is when there is retrograde flow seen during systole and antegrade flow is seen during diastole.
Pubblicato da David Spizzichino a 16:00