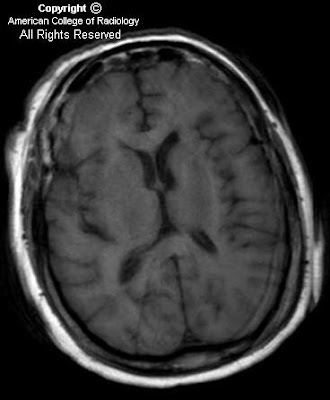 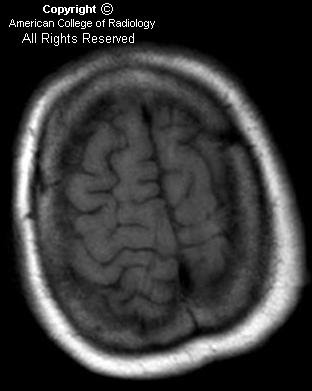 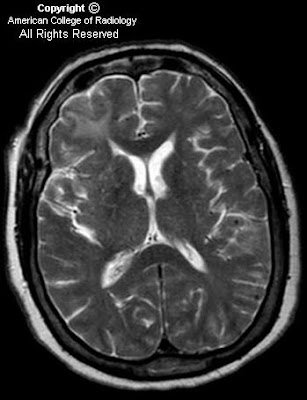 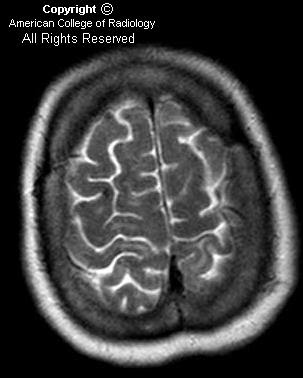 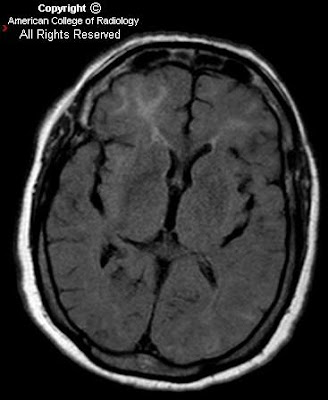 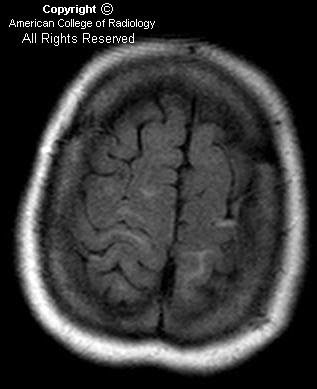 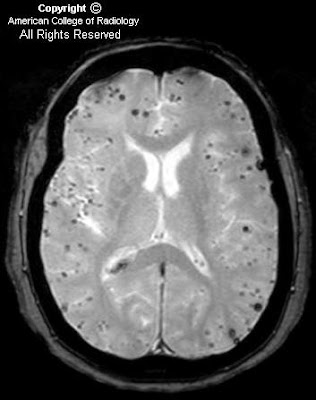 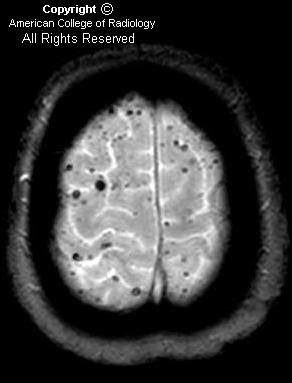 
Cerebral amyloid angiopathy (CAA) is a significant cause of cortical-subcortical cerebral bleeds in the normotensive elderly individual. In CAA, beta-amyloid protein is deposited in the media and adventitia of small to medium sized blood vessels in a cortical, subcortical, and leptomeningeal distribution. These deposits are associated with fibrinoid necrosis, vessel wall fragmentation, and microaneurysms, all of which produce vascular fragility and lead to spontaneous micro and/or macrohemorrhages, with the latter sometimes having devastating consequences. Fibrinoid necrosis can also lead to blood vessel narrowing and subsequent distal ischemia. CAA is sometimes called Congophilic amyloid angiopathy, because beta-amyloid deposits are highlighted with Congo red stain and show yellow-green birefringence under polarized light.

CAA has been found at autopsy in up to one third of individuals between 60 and 70 years old, and in up to two thirds 90 years and older. Nevertheless, the majority of patients with CAA remain asymptomatic, and thus the condition is currently under recognized. When symptoms do arise, they are similar to those of a transient ischemic attack or dementia, which are nonspecific findings making CAA difficult to diagnose clinically. Patient symptomatology is usually related to macrohemorrhages, defined as larger then 5mm, and can resemble an acute ICH. CAA is not associated with systemic amyloidosis, yet is strongly associated with Alzheimer disease.

Radiographic findings of CAA normally include cortical and subcortical hemorrhages, atrophy, and leukoencephalopathy. Microhemorrhages associated with CAA are normally not seen on CT, T1-weighted, or T2-weighted sequences. Therefore, if CAA is suspected clinically, or in the event that cortical-subcortical focal intracranial hemorrhages are seen on a noncontrast enhanced CT, an MRI should be obtained, which includes T2*-weighted gradient-echo (GRE) sequences. At present, GRE is one of the most sensitive sequences for the detection of acute and chronic hemorrhages, like the ones associated with CAA. The hemosiderin present within these cerebral hemorrhages, causes local magnetic field inhomogeneities, with a prominent loss of signal on T2*-weighted GRE sequences. Susceptibility-weighted imaging (SWI) is another sequence that is gaining acceptance, which is also very sensitive in detecting cerebral microhemorrhages. Nevertheless, for a definitive diagnosis of CAA, biopsy or autopsy is required. It is important to note that patients taking anticoagulants or aspirin which are diagnosed with CAA, should be counseled regarding the risks and benefits of treatment. Finally, no treatment is currently available to halt or reverse beta-amyloid protein deposition associated with CAA.
Pubblicato da David Spizzichino a 16:00