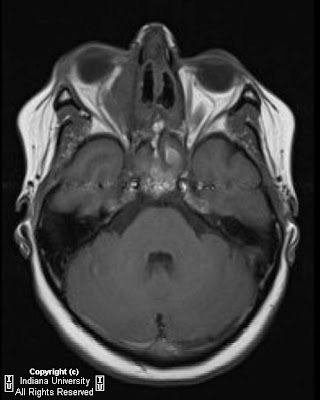 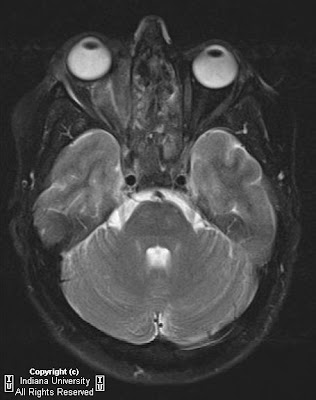 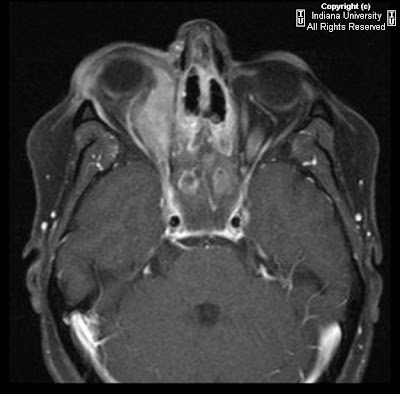 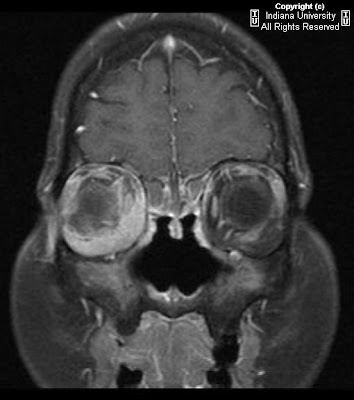 
There is an extraconal mass within the right medial orbit, adjacent to the lamina papyracea, extending in an arc like fashion from the superomedial aspect to the inferolateral aspect of the right orbit. Mass extends into the intraconal space and splays the medial and inferior rectus muscles. Mass is hypointense to cortex on T2 weighted images and isointense to cortex on T1-weighted images. Mass demonstrates homogeneous post contrast enhancement. There is associated proptosis of the right globe. There are extensive postoperative changes of the paranasal sinuses and mucosal thickening involving all of the paranasal sinuses, predominately the ethmoid air cells.

Wegener's granulomatosis is a multisystem disease classically characterized by necrotizing granulomatous inflammation of the upper and lower respiratory tract and the kidneys and necrotizing vasculitis of the small and medium sized vessels. Patients typically present between 35-55 years of age. The nose and sinuses are most commonly affected, and patients may present with sinus headaches and nasal drainage. The lungs are affected in 85% of patients, and kidneys are involved in 75% patients. Most of the morbidity of the disease is usually related to the renal component.

Wegener's involvement of the eye is not uncommon, occurring in 30-60% of cases. Approximately 8-16% of patients with Wegener's granulomatosis initially present with ophthalmic disease. Ocular manifestations can be diverse, ranging from mild conjunctivitis to episcleritis, uveitis, ciliary vessel vasculitis, and retro-orbital mass lesions. Vision loss can occur secondary to mass effect, ischemia, or vasculitis of the optic nerve or occlusion of the retinal artery.