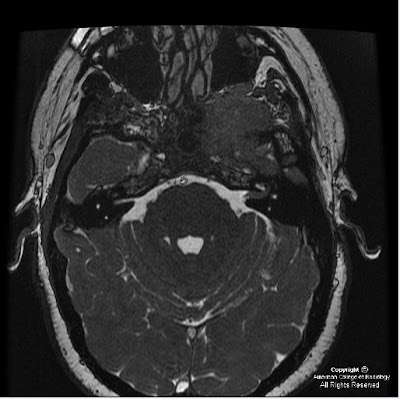 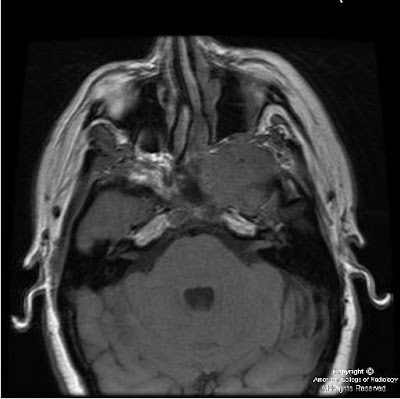 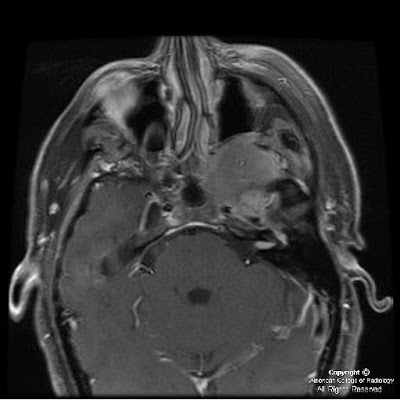 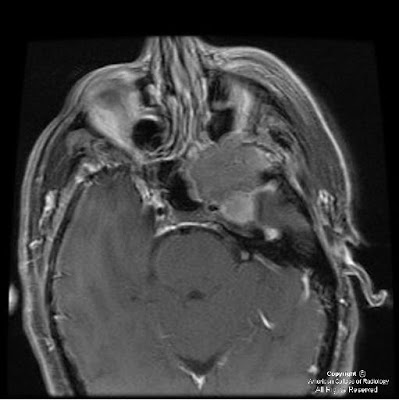 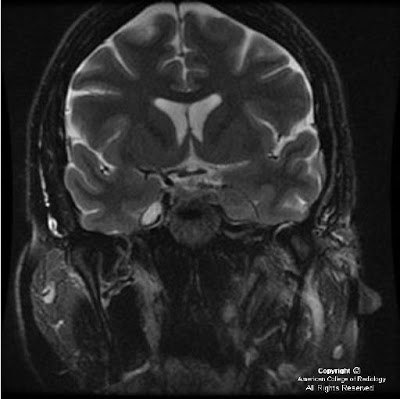 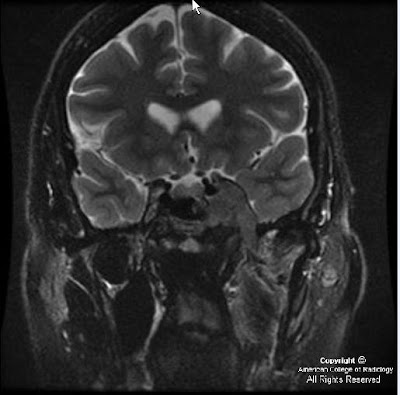 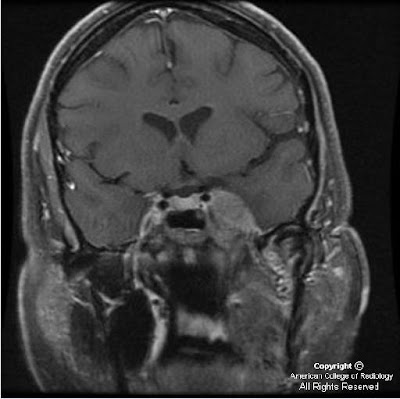 There is a large mass centered on the left greater sphenoid wing, extending into the left sphenoid sinus and left pterygopalatine fossa. It also extends into the left middle cranial fossa, left cavernous sinus, and left Meckel's cave. The tumor has involved V3, and foramen ovale is markedly widened on the left. There tumor has extended along the GSPN to the geniculate ganglion, and from there it has involved the tympanic and intracanalicular segments of the 7th nerve. The mass is isointense to brain on T1-weighted images and hypo- to isointense on T2-weighted images, consistent with hypercellularity. There is moderate enhancement of the mass. No macroscopic flow voids are seen to suggest a highly vascular lesion.

Figure 1: A mass lesion involving the skull base and pterygopalatine fossa on the left is shown on this axial FIESTA image. Abnormal soft tissue is seen in the left IAC as compared to fluid in the right IAC. The normal right greater wing of the sphenoid bone is shown. On the left, the greater wing of the sphenoid has been destroyed by the mass.
Figure 2: The soft tissue intensity skull base mass is again shown on the left. Infiltration of fat in the L pterygopalatine fossa is present, as compared with normal bright fatty signal in the R PPF. Asymmetrical signal is again seen in the left vs right IAC.
Figure 3: Following injection of gadolinium, moderate homogeneous enhancement of the mass lesion is shown. Also appreciated is extension into the L sphenoid sinus and displacement of the left cavernous segment of the L internal carotid artery. Meckel’s cave on the L is obliterated. Abnormal enhancement in the left IAC and abnormal thickening and enhancement of the tympanic segment of the facial nerve are also shown. Subtle linear enhancement extends posteriorly from the dominant mass along the greater superficial petrosal nerve on the left.
Figure 4: A more superior post-gadolinium image more discretely defines enhancement and enlargement of V3 on the left, posterior to the main bulk of the tumor mass. Tumor is again seen to extend posteriorly along the GSPN to the geniculate ganglion.
Figure 5: Tumor is seen to involve and expand Meckel’s cave on the left, replacing the normal CSF signal with intermediate signal intensity of a highly cellular tumor. The unaffected Meckel’s cave on the right, filled with CSF, is shown for comparison. The tumor is confined to Meckel’s cave on this image and has not extended through the dura to involve the adjacent temporal lobe.
Figure 6: A more anterior coronal T2-weighted image shows extension of the tumor into the cavernous sinus on the left, adjacent to the flow void of the internal carotid artery. Marked thickening of the third or mandibular division of the trigeminal nerve is shown on the left. The mass has markedly expanded foramen ovale on the left. This image also demonstrates atrophy and mild T2 hyperintensity of the muscles of mastication on the left, due to V3 dysfunction and resultant subacute to chronic denervation change. The masticator muscles on the right have normal bulk.
Figure 7: The enhancing tumor mass involving Meckel’s cave and the cavernous sinus on the left is again shown. This image better demonstrates the unaffected foramen ovale on the right. Also demonstrated on this image is volume loss and diffuse mild enhancement of the left temporalis muscle as compared to the right, consistent with denervation change as previously discussed). Signal drop-off due to dental hardware and inhomogeneity of the magnetic field has resulted in artifact and poor fat suppression in the right masticator space.


Adenoid cystic carcinomas have a high propensity for perineural invasion and extension.
The facial and trigeminal nerves are the cranial nerves most commonly involved by perineural spread of tumor.
The facial nerve may be invaded directly by tumors of the parotid gland, or the tumor may involve the trigeminal nerve and then extend along the greater superficial petrosal nerve to reach the facial nerve.
A second “five-to-seven” connection is the auriculotemporal nerve, which also provides an important route for perineural spread of tumor.
The proximal greater superficial petrosal nerve, geniculate ganglion, and tympanic segment of the facial nerve often show normal mild enhancement due to investment by a rich vascular plexus in these regions.
Characteristics of perineural extension of tumor include abnormal enhancement and enlargement of nerves, replacement of fat in neural foramina, and widening of neural foramina. Denervation changes in innervated muscles may also be observed.


Adenoid cystic carcinoma (ACC) is the second most common malignant salivary gland tumor after mucoepidermoid carcinoma. It can arise from either the major or minor salivary glands. It is the most common malignancy of the submandibular and sublingual glands. It most commonly presents as a painless enlarging mass, though the initial presentation may be due to perineural extension of tumor (pain or paresthesia, for example) if the tumor is in a deep location. ACC is associated with a high risk of distant metastases (most commonly to the lung), and these can occur 10-20 years after initial diagnosis and treatment of the primary lesion. ACC may spread through local or direct extension of the tumor, hematogenous and lymphatic dissemination, and perineural extension.

ACC has a high propensity for perineural invasion and extension. SCCs also have a high tendency to spread perineurally, and because they are the most common head and neck cancer, one will likely encounter more cases of perineural tumor spread from SCC than from ACC in practice. Other cancers of the head and neck, including melanomas, basal cell carcinomas, and mucoepidermoid carcinomas also extend perineurally, but less commonly. Branches of the facial and trigeminal nerves are most commonly involved as they innervate the cutaneous and mucosal surfaces of the head and neck, where most tumors arise, as well as the salivary glands. The facial nerve can be invaded directly when ACC occurs in the parotid gland, or the tumor may involve the trigeminal nerve and then extend along the greater superficial petrosal nerve to reach the facial nerve. An alternate route for cranial nerve 5 to cranial nerve 7 spread (or vice versa) is the auriculotemporal nerve, which is located posterior to the neck of the mandible.

The greater superficial petrosal nerve emerges from the geniculate ganglion of cranial nerve VII carrying sensory (from the soft palate mucosa) and parasympathetic fibers. It courses anteromedially through the temporal bone and emerges through the facial hiatus. It then travels underneath Meckel’s cave and combines with the deep petrosal nerve (carrying sympathetic fibers) to form the vidian nerve. The vidian nerve travels anteriorly to the pterygopalatine ganglion, where the parasympathetic fibers synapse before being distributed to the lacrimal gland and mucosal glands of the nasal and oral cavities. This nerve pathway is vulnerable to tumor infiltration and is a common pathway for perineural extension of tumor.

Portions of the facial nerve that are invested with a rich vascular plexus may normally enhance on MRI. These normally enhancing regions are the proximal greater superficial petrosal nerve, geniculate ganglion, and tympanic segment of the facial nerve; the labyrinthine and descending mastoid segments of the facial nerve may also show mild enhancement under normal circumstances. The more distal and anterior portions of the greater superficial petrosal nerve, however, are not invested by a vascular plexus and should not enhance with contrast on MRI. Similarly, the facial nerve in the IAC does not demonstrate any enhancement under normal conditions at 1.5T. Characteristics of perineural spread to the facial nerve include thickening and abnormally intense enhancement of nerve segments, as well as replacement of fat in neural foramina by tumor. Denervation changes in the muscles of facial expression may be observed, but these are often extremely subtle due the small size of the affected muscles. Due to ACC’s high propensity for perineural spread and high tendency to recur, it is important to regularly assess for perineural extension of these tumors when MR images are being interpreted.
Pubblicato da David Spizzichino a 16:00