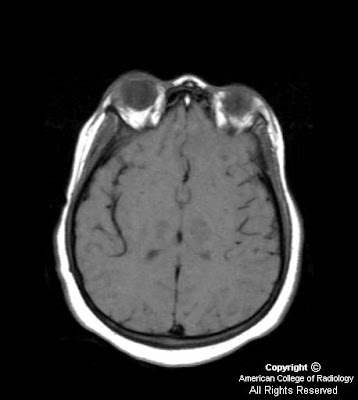 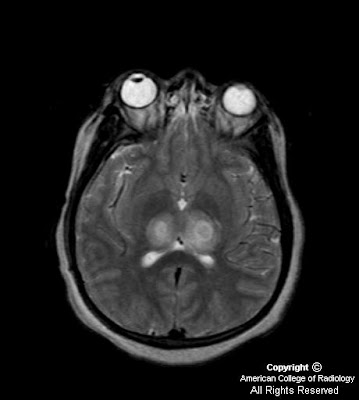 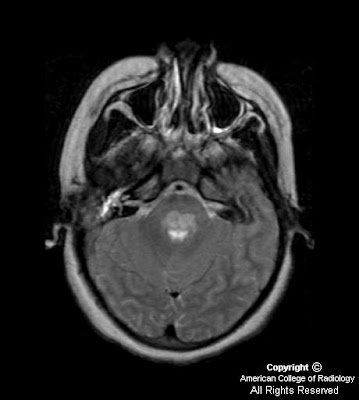 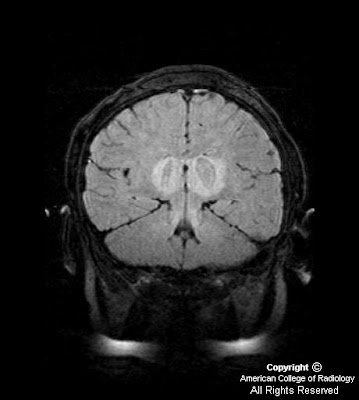 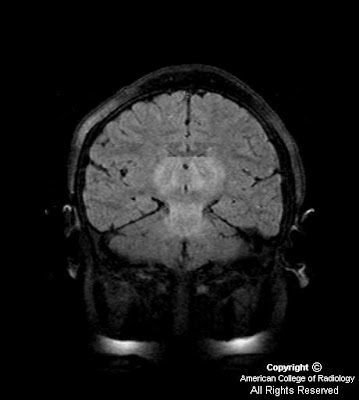 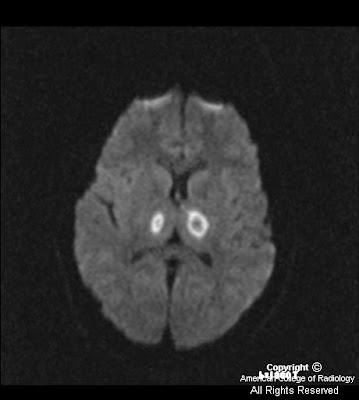 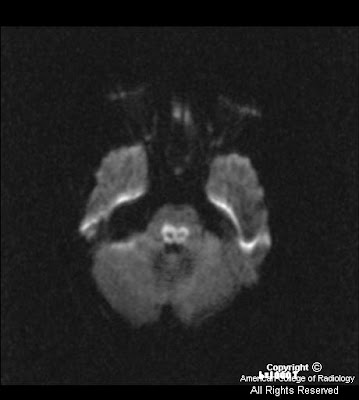 
Acute Necrotizing Encephalitis (ANE) characteristically occurs in children after a mild antecedent illness. The peak age of incidence is six to eighteen months, however, ANE can occur in older children as well (the patient in this particular case was nine years old). Typically, the patient will present within a few days of a mild illness (e.g. fever and/or upper respiratory infection) with seizures, decreased level of consciousness, and/or vomiting.

Pathologic evaluation of the lesions demonstrates necrosis (due to severe edema) in the thalami, tegmentum, and dentate nuclei. In addition to necrosis, there is florid petechial hemorrhage around small parenchymal vessels. Pathologically, ANE is differentiated from ADEM by the lack of inflammatory cells found in ANE, as opposed to the presence of lymphocytes in ADEM. In addition to characteristic lesions of the thalami, tegmentum, and dentate nuclei; about one half of those affected will also have patchy lesions in the cerebral white matter (similar in appearance to ADEM). Unlike the thalamotegmental lesions, the patchy cerebral white matter lesions of ANE are not hemorrhagic. The presence of hemorrhage in patchy cerebral white matter lesions instead suggests the diagnosis of Acute Hemorrhagic Encephalomyelitis, which is distinct from ANE and ADEM.

Imaging studies in ANE typically show bilaterally symmetric lesions of the thalami, which may extend to the lateral putamina and external capsule, as well as tegmentum and cerebellar nuclei. The lesions are often necrotic and hemorrhagic. Ring-enhancement around the areas of hemorrhage and necrosis can be seen within a few days of onset. Initially, on diffusion-weighted imaging (DWI), the lesions exhibit restricted diffusion due to cytotoxic edema (restricted diffusion results in increased signal intensity on DWI). As necrosis develops, the movement of water molecules is less restricted (and ultimately unrestricted, as cell membranes dissolve), resulting in decreased signal intensity in areas of necrosis on DWI. Magnetic susceptibility artifact, secondary to hemosiderin deposition, may also contribute to the hypointensity seen in the center of the lesions on DWI; however, depending on the type of DWI employed, magnetic susceptibility artifact is probably less of a factor than decreased restriction of diffusion due to necrosis.
Pubblicato da David Spizzichino a 16:00