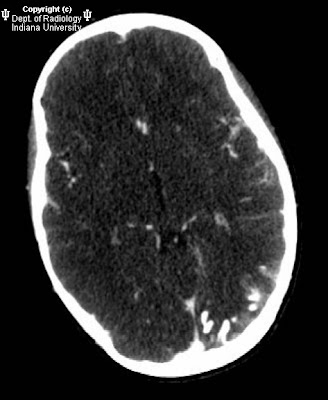 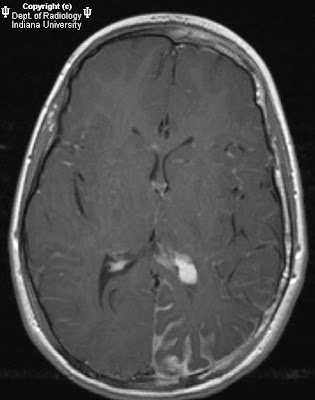 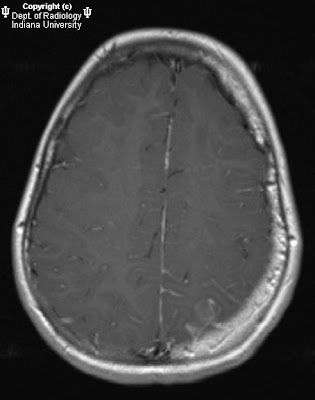 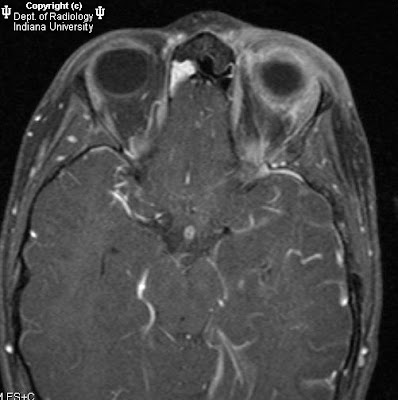 Classically the patients have a facial port-wine stain, ipsilateral intracranial abnormalities, contralateral hemiparesis, hemiatrophy, mental retardation, and homonymous hemianopia. The severity of these features varies widely patient to patient. Commonly the patients will have glaucoma on the affected side. Seizures are also very common.
Only 8% of patients with port-wine stains have Sturge-Weber Syndrome. 13% of Sturge-Weber syndrome patients do not have a facial angioma.
There is no clear genetic link at this time. There is no sex or race predilection and it is very seldom seen more than once in the same family. Several different chromosomal abnormalities have been implicated.
Radiographically one can see "tram track calcifications" which are leptomeningeal calcifications like those seen on the CT image.
MRI can demonstrate the angiomatous abnormalities. In this case the cutaneous capillary angioma (port-wine stain) is well demonstrated as is the meningeal angiomatosis over the left occipital lobe. Cerebral hemiatrophy is well demonstrated by MRI as is the choroidal angiomatosis.
Multiple therapies are employed in these patients. The port-wine stains can be "removed" with laser treatments. Seizures can be treated with anticonvulsants. Refractory seizures can be treated surgically. The surgeries can be as extensive as a hemispherectomy. 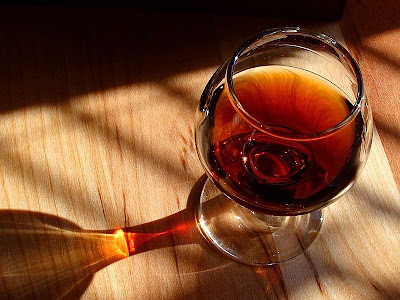