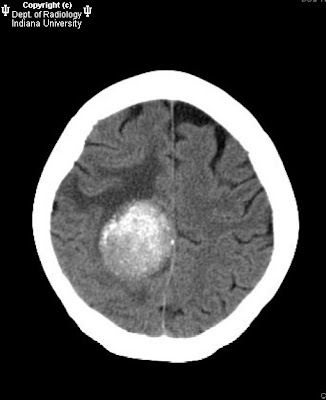 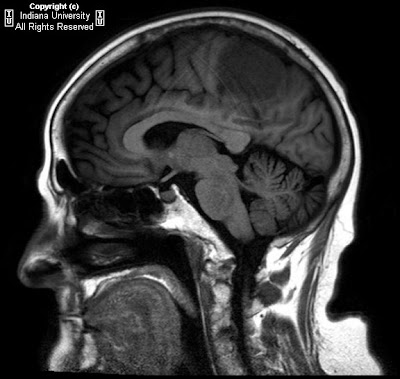 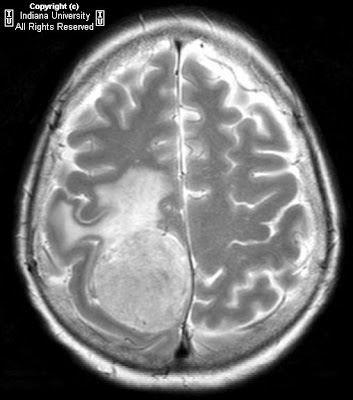 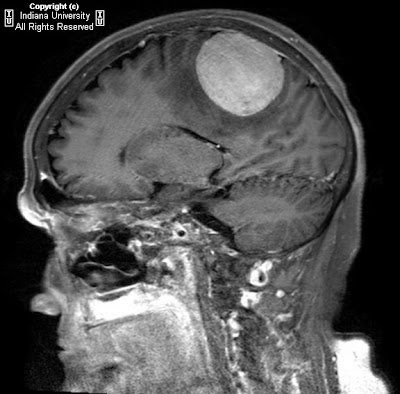 CT shows a large circumscribed vertex mass in the right parietal region with heterogeneous hyperdensity and calcification. There is significant vasogenic edema and minimal if any mass effect or midline shift.
MRI from next day shows broad attachment of the lesion to the dura with moderate contrast enhancement. T2 prolongation compatible with vasogenic edema is again present.

Meningiomas are thought to arise from arachnoid cap cells and may arise in the spinal cord or intracranially. Fewer than 10% are symptomatic. They may present with headache, seizure, or focal neurologic signs due to cranial nerve or brain parenchymal compression or vascular compression. Known causes include radiation and genetic abnormalities (including a relationship to NF2). Other causes are speculated as well. Meningiomas are generally considered benign tumors. However, a few histologic types can break this rule and invade cortex and even metastasize. Therapy includes conventional surgery and radiosurgery. Chemotherapy can be used following resection. Angiography is often performed for surgical planning and occasional embolization.

Plain films of the skull may demonstrate hyperostosis and increased vascular markings. CT and MRI demonstrate extra axial, dural based lesions. Meningiomas typically enhance homogeneously and may have an enhancing dural tail (which may be more evident on coronal or sagittal MRI depending on the location)..On CT, the lesion may be isoattenuating to hyper attenuating but may contain calcifications. Vasogenic edema will likely be present and may be more apparent on MRI. T1 and T2 signal is variable. MR spectroscopy demonstrates a high alanine peak. Buckling of the cortex (seen in this case) is strongly suggestive of an extra axial lesion and should narrow the differential diagnosis. Other clues to extra axial location are brain cysts and trapped CSF. Angiographic findings include a sunburst vascular pattern and "mother-in-law" blush (comes early and stays late). 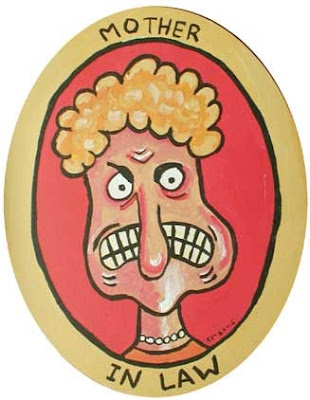