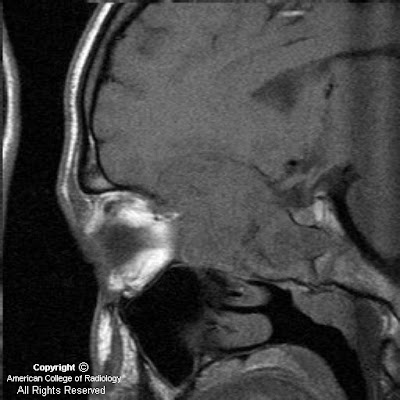 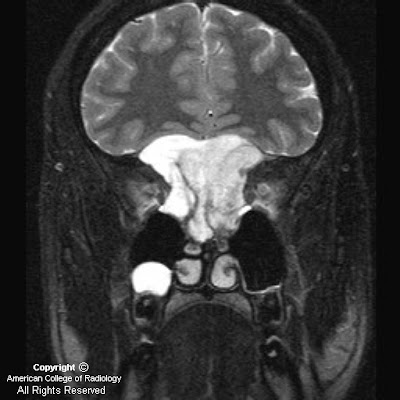 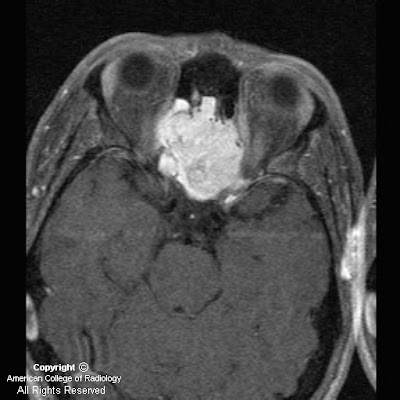 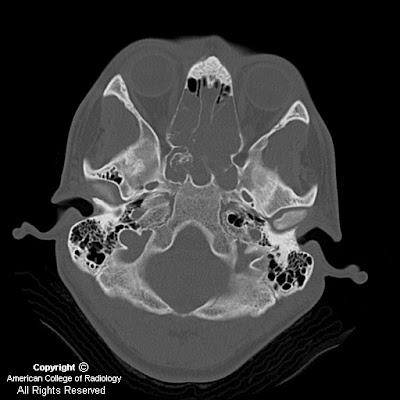 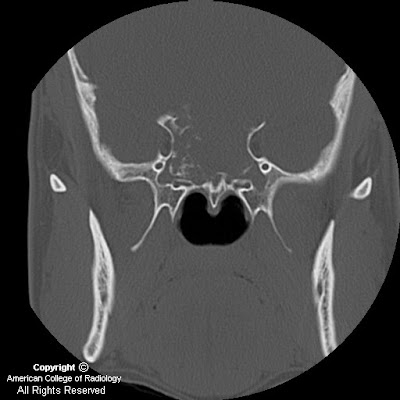 Figure 1: Sagittal T1 demonstrates a low-signal mass centered in the sphenoid bone and extending into the anterior cranial fossa. The pituitary and suprasellar cistern are preserved.
Figure 2: Coronal T2 image shows displacement of the frontal lobes without brain edema confirming extra-axial location. The mass is high signal on T2 images which is non-specific but typical of chondrosarcoma. There is edema in and around both optic nerves.
Figure 3 and Figure 4: T1 weighted fat-suppressed post gadolinium axial and coronal images demonstrate avid enhancement of the solid mass.
Figure 5 and Figure 6: Axial and coronal CT demonstrate the calcified matrix within the mass taking characteristic “ring and arc” shapes. The anterior and superior walls of the sphenoid sinus are eroded confirming the aggressiveness of the tumor.


Intracranial chondrosarcoma is a slow-growing, locally invasive, rare malignant neoplasm of cartilaginous origin which accounts for 0.15% of all intracranial tumors and most commonly affects the skull base. Often when encountered, other anterior skull base malignancies, such as meningioma, metastasis, chordoma, rhabdomyosarcoma, and lymphoma may be difficult to distinguish. However, recognizing the range of appearances of intracranial chondrosarcomas on various imaging modalities along with clinical, gross, and histological studies may allow for improvement in the diagnosis, evaluation, and management of this malignancy.

Primary chondrosarcoma is divided into multiple variants, depending on the location and histological characteristics. These include conventional, clear cell, myxoid, mesenchymal, extraskeletal, and dedifferentiated. Skull base chondrosarcomas are most commonly of the conventional type and occupy areas that include petrosal bone, temporoccipital bone, clivus, sphenoethmoidal complex, and less commonly the frontal, parietal, and ethmoidal bones. Conventional chondrosarcomas can be further classified into histological subtypes of grade I, grade II, and grade III, with grade I demonstrating the least malignant and aggressive potential. The mesenchymal variant is the most malignant of all types and typically presents in a younger population. This type has a predilection for dural and cerebral extension.

Intracranial chondrosarcomas have been shown to be minimally sensitive to conventional radiation therapy, thus requiring radical excision of the tumor for effective management. Therefore, diagnostic imaging with MRI and CT is significant for neurosurgical assessment of tumor invasion and its anatomic orientation with any surrounding vascular, bony, and neural structures. Radiological imaging has enhanced diagnosis as CT is useful in finely delineating tumor invasion, bony invasion, and abnormal “ring and arc” or stippled calcification typical of chondrosarcomas. The tumor is normally isoattenuated or hyperattenuated with some degree of heterogeneous enhancement. MRI with gadolinium allows for evaluation of significant vessels and nerves such as the carotid arteries and optic nerves that lie in the preferred area of tumor growth. Furthermore, the tumor appears with decreased signal on T1 weighted images and increased signal on T2-weighted images. MRI enhancement will be mild to moderate, typically described with a “honey-combing” appearance due to islands of cartilage. In addition, it has been demonstrated that there is only mild edema surrounding chondrosarcomas in contrast to other skull base malignancies. MRI perfusion has also been documented to be effective in differentiating chondrosarcomas from other anterior skull base malignancies by assessing the cerebral blood volume and perfusion. Tumor vascularity is variable depending on the histological type; however, conventional and mesenchymal chondrosarcomas are commonly hypovascular, which differentiates it from the significantly vascular meningioma and metastatic lesion.

Although rare, intracranial chondrosarcomas should be considered in the differential diagnosis of any skull base malignancy that causes cranial nerve deficits. Clinically, patients commonly present with headaches, tinnitus, dizziness, decreased sense of hearing, visual symptoms such as diplopia and other oculomotor disorders depending on the location of the mass. The mean age of patients with intracranial chondrosarcomas has been reported to be 37 without any gender predilection. Although conventional radiation has limited indication, there has been considerable debate regarding optimal treatment with proton radiotherapy in combination with surgical excision. The difficulty in evaluating the outcomes of these various treatment strategies for skull base chondrosarcomas stems from the fact that this is a rare malignancy.
Pubblicato da David Spizzichino a 16:00