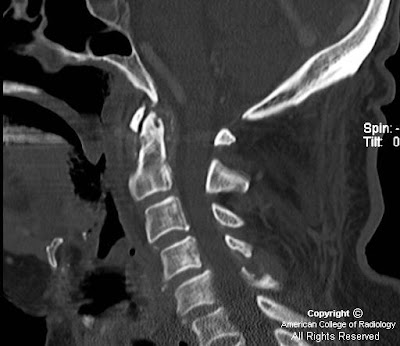 Figure 1: Sagittal view from a CT of the cervical spine utilizing a bone algorithm demonstrates a well-defined subchondral cyst in the odontoid process associated with partially calcified retro-odontoid soft tissue. There is also an erosion of the C5 spinous process as well as a fluid collection interposed between the spinous processes of C4 and C5. Calcification of the C2/C3 intervertebral disc is also noted. There is also minimal calcification of the longus colli.


CPPD (calcium pyrophosphate deposition disease) is one of the entities known to cause crystal deposition in cartilage. It is most commonly found to be idiopathic, but other etiologies include a hereditary autosomal dominant condition, hyperparathyroidism, and hemochromatosis. While the classic locations for CPPD include the triangular fibrocartilage of the wrist, menisci of the knee, and pubis symphysis, the spine can also be involved. CPPD crystal deposition can be found in several structures of the spine including the ligaments, intervertebral discs, joint capsules, and synovium.

CT is the best modality to see the various calcific deposits in the cervical spine, while MRI is usually used to evaluate for spinal cord compression or myelopathy. Imaging findings include calcification of the intervertebral disc as well as disc space narrowing, “vacuum phenomena,” and vertebral sclerosis. Calcification in the periodontoid tissue in association with acute neck pain has been coined the “crown dens syndrome.” In addition to this acute symptomatology, these calcifications, particularly in the retro-odontoid region, can eventually lead to neurologic compromise from mass effect in the form of ventral cervicomedullary compression in the elderly. Deposition within the joints, such as the atlantoaxial and facet joints, can lead to erosions, subchondral cysts and pathologic fractures. CPPD deposits in the spinal ligaments can cause either a focal or diffuse enlargement of the ligaments and cause spinal stenosis.

The differential for calcific deposits in the cervical spine is a limited one. Hydroxyapatite deposition disease (HAAD) can present with periodontoid calcifications and can be indistinguishable from CPPD on CT. Patient history and, ultimately histological analysis of the crystals, help differentiate between the two. HAAD can also present as a calcific tendonitis with calcifications in the longus colli muscles, usually at the C1-C2 level. The inflammatory response to the CPPD deposits in the intervertebral disc space can be aggressive enough to mimic a discitis. Correlation with the patient’s clinical history would be helpful. In difficult cases, a biopsy may be needed. Gout can cause similar findings as CPPD including erosions of the cervical osseous elements, including the odontoid process, as well as mimic a discitis. Gout’s main imaging findings include erosions and proliferative osseous changes. Clinical history and/or crystal analysis may be needed for definitive diagnosis.
Pubblicato da David Spizzichino a 16:00