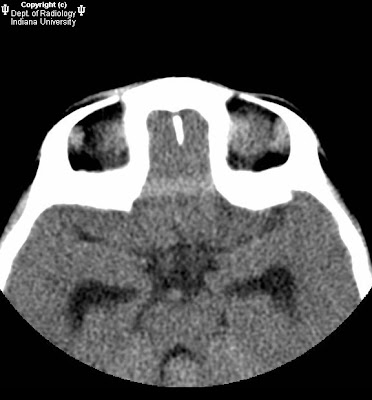 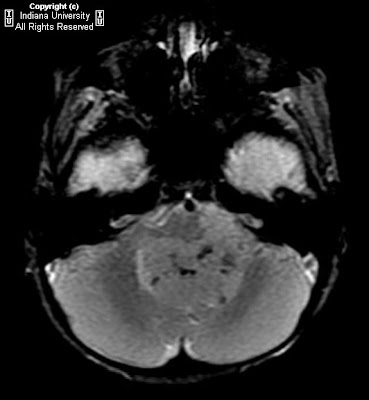 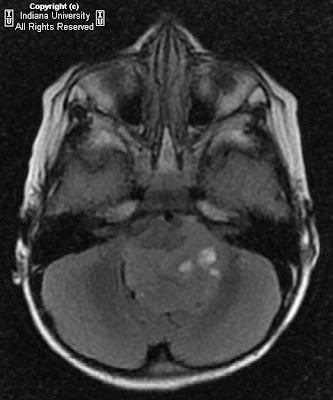 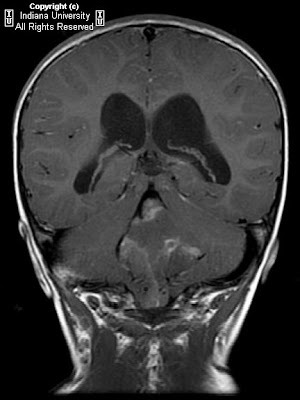 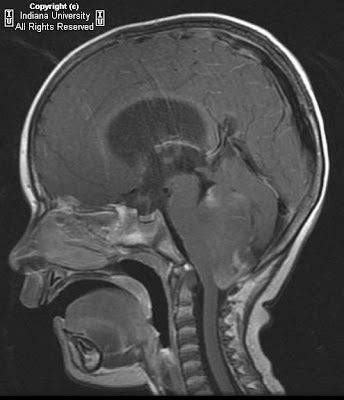 Arising from the ependymal lining of the ventricles, ependymomas constitute one-tenth of primary CNS tumors in children. 90 percent of the tumors are intracranial which helps ependymomas rank number three among pediatric brain tumors. The majority of the intracranial epenymomas are infratentorial (about two-thirds). The remaining one-third of the intracranial variety are found around the periventricular white matter.

An equal distribution has been reported in males and females. No known race predilection noted. The mean age of diagnosis is 5 to 6 years of age. The clinical presentation is often non-specific. However, it is usually related to increased intracranial pressure. The classic triad (if present) includes morning headache, relieved by vomiting and improvement with progression of the day. Other signs/symptoms can include irritability, gait problems, fatigue, personality change and declining performance at school.

Gross total surgical resection and radiation therapy are the mainstays of treatment. The fiver year rate of survival is estimated close to 55 percent. Poorer outcomes have been reported in children with incomplete resection. The exact role of chemotherapy is still under investigation.

CT and MRI are the primary modalities for imaging brain tumors in children. A CT may be obtained initially. However, MRI with contrast is more useful for component characterization and tumor extension.

On CT, calcifications are present in half of these tumors. Cystic and hemorrhagic components can also be seen. With fourth ventricular tumors, hydrocephalus can be present. The enhancement pattern is typically heterogeneous.

On MRI, an inhomogeneous appearance persists with T1 isointensity to hypointensity. The tumor is isointense to hyperintense of T2 weighted images. Areas with calcification or blood products are T1 hyperintense and T2 hypointense. On gradient images, the calcification demonstrates blooming artifact. The post contrast enhancement pattern remains inhomogeneous with overall mild to moderate enhancement. High quality sagital sequences should be included in the MRI protocol. A sagital image can help identify the point of origin (floor of fourth ventricle = ependymoma, roof of fourth ventricle = medulloblastoma). MR spectroscopy cannot reliably differentiate between this and other tumors. However, lactate and choline peak elevation is present with decrease in NAA.
Pubblicato da David Spizzichino a 16:00