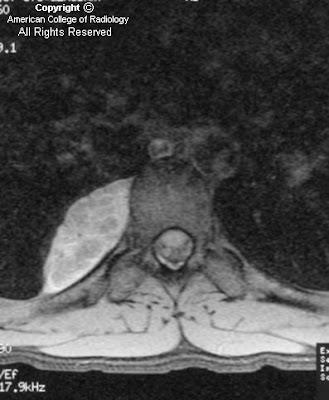 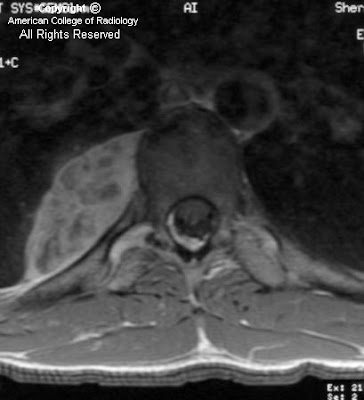 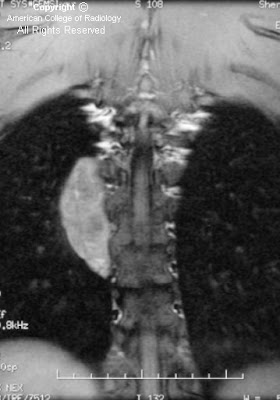 
The term malignant schwannoma, including the malignant melanotic subtype, is no longer used. Malignant peripheral nerve sheath tumor (MPNST) is the accepted nomenclature by the World Health Organization Committee used to describe a spindle cell sarcoma arising from a nerve or neurofibroma or demonstrating nervous tissue differentiation. These highly aggressive neoplasms can locally infiltrate as well as metastasize, most commonly to the lungs. Neurofibromas may undergo transformation to MPNST, which may or may not be associated with neurofibromatosis Type 1 (NF-1). Overall there is a 4% chance of malignant transformation to MPNST in NF-1, and any rapid change in size of a previously stable neurofibroma should warrant immediate biopsy. MPNST occur in men and women with equal frequency except in cases of NF-1, where men are four times more likely to be affected than women.

MPNST usually involve major nerve trunks, typically the sciatic nerve, brachial plexus, and sacral plexus. Patients present with pain and neurological symptoms more often than do patients with benign PNST. Rarely, the alimentary tract, subcutaneous tissues, parotid glands, and the orbits can also be involved. In extremely rare cases, these tumors have been found in the cerebellopontine angles along the cranial nerves.

MR is the diagnostic modality of choice for characterizing neurogenic tumors. However, distinguishing MPNST from neurofibromas, schwannomas or other benign lesions may at times be challenging, particularly in the absence of the “target,” fascicular,” or “split-fat” signs that typically reflect a benign etiology. MPNST are usually fusiform in shape, larger than 5 cm, and appear irregular and heterogeneous depending on the degree of cystic degeneration, hemorrhage, necrosis, and cellularity. They may be isointense or slightly hyperintense compared to muscle on T1WI. The signal intensity and heterogeneity are markedly greater on T2WI, and enhancement is seen after IV contrast. Other helpful clues in determining malignancy are identifying tumor invasion into surrounding adipose and adjacent structures, as well as associated bone and soft tissue edema. The extent of cortical bone involvement is better assessed with CT. It has also been reported that on Gallium-67 citrate imaging the degree of uptake by MPNST is greater than that for benign lesions, which may prove helpful in equivocal cases.

Management of MPNST requires complete surgical resection if possible. Post-operative radiation and chemotherapy are also necessary due to the high risk of recurrence, regardless of complete or incomplete tumor resection. Even with aggressive therapy, about 50% of patients have local recurrence. The reported 5-year survival rate for patients with MPNST but without NF-1 is 50%, whereas for patients with both MPNST and NF-1 it decreases to approximately 10%.
Pubblicato da David Spizzichino a 16:00