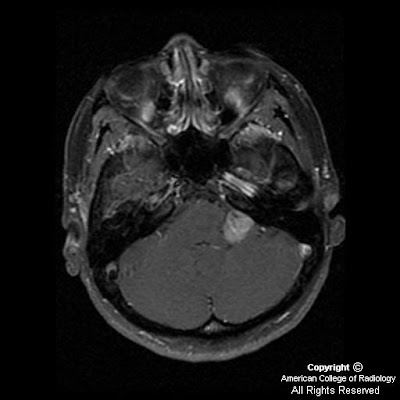 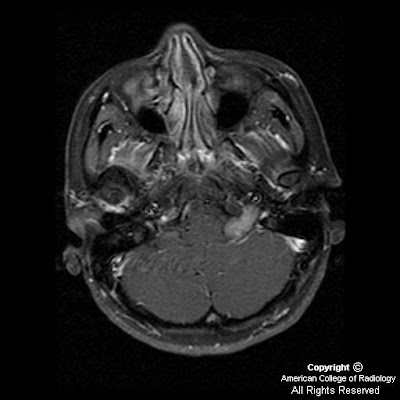 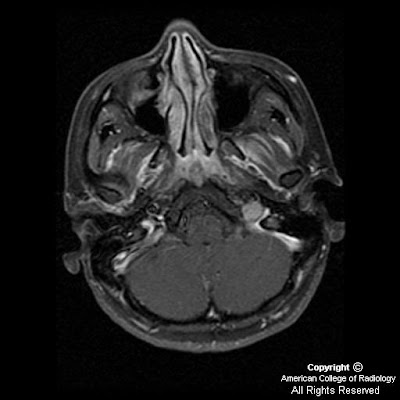 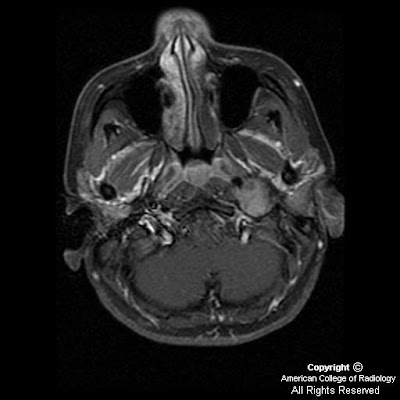 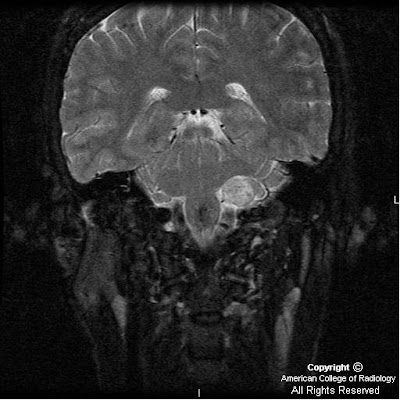 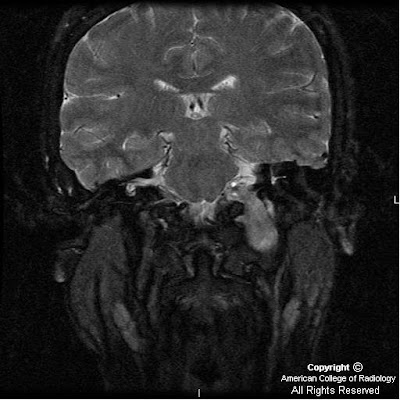 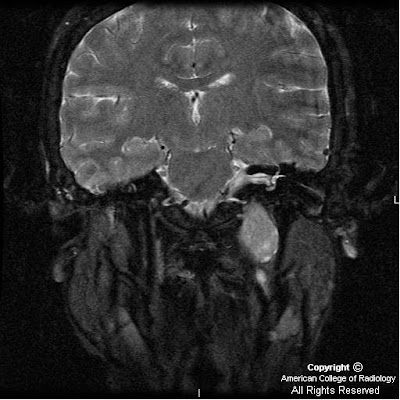 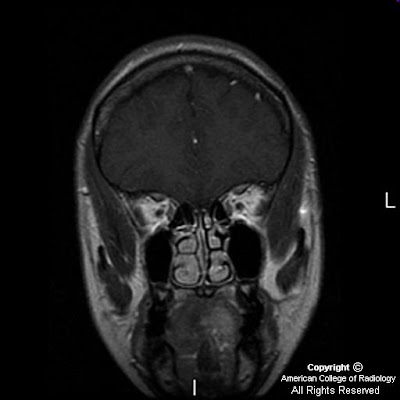 Post gadolinium axial T1 weighted images demonstrate homogenous enhancement of a dumbbell-shaped mass in the left cerebellopontine angle cistern extending through and widening the jugular foramen. There is anterior displacement of the left internal carotid artery. The inferior portion of the mass lies directly external to the left hypoglossal canal. There is mass effect intracranially on the medulla and extracranially on the left jugular vein.
Coronal T2 weighted images demonstrate a hyperintense dumbbell shaped lesion at the inferior aspect of the left CPA extending through and widening the left jugular foramen. Intracranially, there is mass effect on left caudal brainstem. Extracranially, the inferior portion of the mass lies exterior to the opening of the left hypoglossal canal and also exerts mass effect on the contents of the carotid sheath.
Post contrast coronal T1 weighted images show decreased size of the left tongue, with associated increased signal, compatible with atrophy and fatty replacement.


Jugular foramen schwannomas arise from schwann cells that form the myelin coating of peripheral axons. They most often occur in the third to fifth decades of life and are more commonly seen in females. These tumors may involve cranial nerves IX-XI. Most commonly, cranial nerve IX is involved. These tumors can remodel the temporal bone and extend into the posterior cranial fossa, possibly producing mass effect on the brainstem and cerebellum. Some tumors may extend below the skull base. The presenting symptoms depend on tumor growth pattern. Symptoms may include hearing loss due to the close proximity of the jugular foramen to the internal auditory canal. As a result, jugular foramen schwannomas can be confused with the more common vestibular schwannoma. Similarly, there may be symptoms referable to CN XII, as in this case.

As seen with other schwannomas, jugular foramen schwannomas are isodense or hypodense to cortex on CT. They demonstrate low signal intensity on T1 weighted images and high signal intensity on T2 weighted images. There is strong enhancement that is typically homogenous, but may demonstrate increasing heterogeneous enhancement with larger lesions. These lesions enhance less intensely than paragangliomas, although without the rapid washout which may be seen in paragangliomas.

Paragangliomas are a form of neuroendocrine tumor that arise from glomus cells. Glomus cells are chemoreceptive organelles found along blood vessels and are involved in blood pressure regulation and flow. Although generally rare, a common location for paraganglioma in the head is the jugular foramen (glomus jugulare). This entity will cause an erosive appearance to the expanded jugular foramen, as opposed to the smooth remodeling seen with the less locally aggressive schwannoma (best appreciated on CT). Paragangliomas also typically demonstrate intense enhancement and flow voids. If MR and CT are equivocal, nuclear scintigraphy (octreotide) may be used to confirm a paraganglioma. Primary jugular foramen meningiomas may have a characteristic dural tail and lack flow voids. Treatment is surgical resection with a varying approach based on the location and extension of the tumor.
Pubblicato da David Spizzichino a 16:00