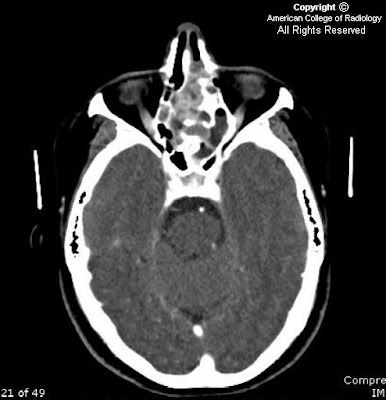 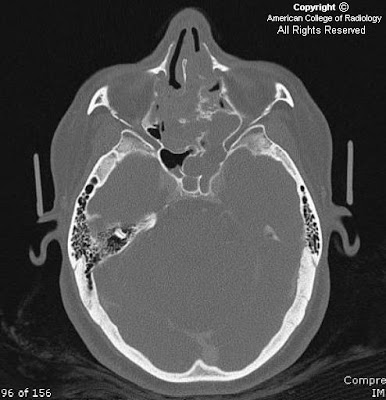 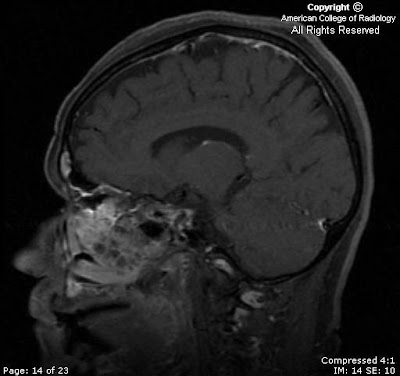 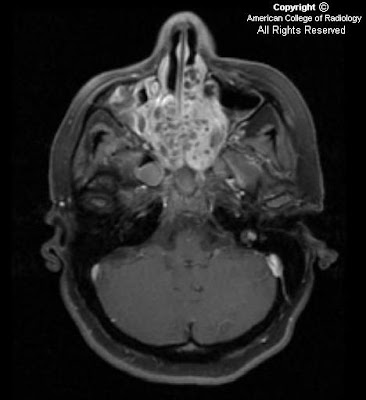 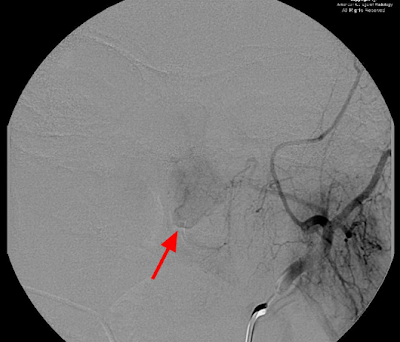 Figure 1 and Figure 2: There is an enhancing mass in the nasal cavity (Figure 1) with involvement of left sphenoid sinus and bony destruction (Figure 2).
Figure 3 and Figure 4: Sagittal and axial postcontrast T1WI images show avid enhancement of the sinonasal tumor highly suggestive of a vascular tumor. No definite evidence of invasion to the base of skull is seen.
Figure 5: Left ECA injection shows a vascular blush corresponding to the mass seen on MRI.

They demonstrate greater than 50% local recurrence and 10% metastatic disease although sinonasal lesions are less aggressive. Sinonasal hemangiopericytoma usually affects both middle-age males and females equally. It occurs in the nasal cavity more often than paranasal sinuses. When it does involve the sinuses, it occurs in the ethmoid and sphenoid sinuses four times more often than it does in the maxillary sinuses.

These lesions typically have a benign course and enlarge slowly over a period of months or years. Symptoms include nasal and sinus obstruction, intermittent epistaxis, and possibly ophthalmologic findings if there is involvement of orbits.

Clinical history and imaging findings are usually not sufficient for diagnosis and tissue diagnosis is needed. However, CT can demonstrate sinonasal mass which is usually enhancing. CT is particularly helpful in evaluation of adjacent bony destruction. On MRI, these tumors appear as solid masses with isointense signals on T1WI with diffuse enhancement after contrast injection. They are isointense to hypointense on T2WI. MRI is of great value in differentiating tumor from inflammatory fluid and demonstrating tumor extension to the base of the skull. Conventional angiography is the best method to demonstrate the vascular supply to the tumor in order to plan for preoperative embolization.