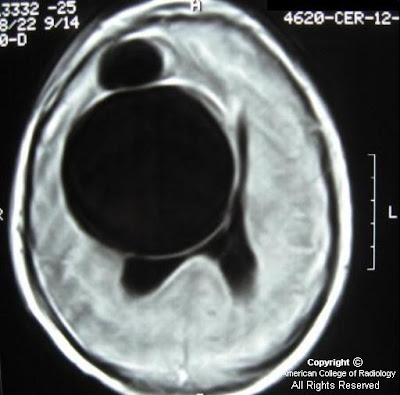 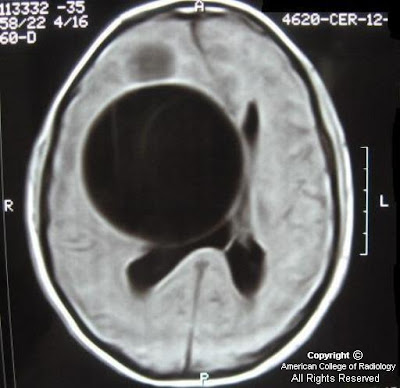 
Intracranial granulosus echinococcosis occurs in only approximately 2% of cases of hydatid disease.
E. granulosus infection of the brain presents with one or more homogeneous, thin-walled cysts.
Cyst signal is isointense relative to cerebrospinal fluid.
The cyst wall typically lacks gadolinium enhancement.
Usually there is no perilesional edema.

Hydatid disease is a worldwide zoonosis produced by the larval stage of the Echinococcus tapeworm. The two main types of hydatid disease are caused by E granulosus and E multilocularis. E granulosus is the more common type, whereas E multilocularis is less common but more invasive, mimicking a malignancy. It is commonly seen in the great grazing regions of the World, particularly the Mediterranean region, Africa, South America, the Middle East, Australia, and New Zealand.

Dogs or other carnivores are definitive hosts, whereas sheep or other ruminants are intermediate hosts. Humans are secondarily infected by the ingestion of food or water that has been contaminated by dog feces containing the eggs of the parasite.

Intracranial granulosus echinococcosis occurs in only approximately 2% of cases of hydatid disease, typically involving the cerebral parenchyma, especially the parietal lobes, corresponding to the middle cerebral artery watershed territory. Intracranial subarachnoid spaces are the second most common location of the disease in the CNS, although their occurrence is far less frequent. Cases of cerebral aqueduct cyst, gigantic cyst arising from the diploe of cranial bones with intracranial extension, and intradural spinal hydatid cysts have been reported. Cysts are usually single and may be unilocular or multilocular. Cerebral hydatid cyst is more common in children than in adults.

At MRI, cerebral hydatid disease generally appears unilocular and is isointense relative to cerebrospinal fluid. The lack of surrounding edema and the marked mass effect make it easy to distinguish cerebral hydatid disease from abscess and cystic tumor. The presence of a hypointense rim, especially on T2-weighted MR images, is characteristic of hydatid cyst of the brain. Cerebral hydatid cyst is generally solitary but may be multiple when it ruptures spontaneously or due to trauma or surgery. Multivesicular cysts are rare in the brain. Calcification occurs in less than 1% of cases.
Pubblicato da David Spizzichino a 16:00