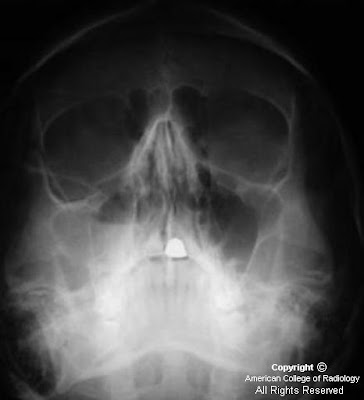 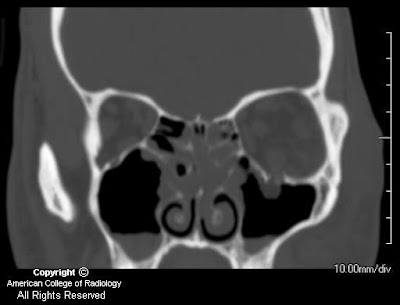 Figure 1: The x-ray demonstrates a fracture of the right orbital floor and an air-fluid level in the right maxillary sinus suspicious for hematoma.
Figure 2: Coronal CT image demonstrates a fracture of the left orbital floor along with herniation of the orbital fat. Air-fluid level in the left maxillary sinus containing high attenuation is consistent with hematoma.

One may expect medial wall fractures to be more common than orbital floor fractures as the medial wall is thinner; however, the reverse is true. Proponents of the "retropulsion" theory attribute this to the honeycomb structure of the ethmoid air cell septae, which support the lamina papyracea, thus allowing it to withstand the sudden rise in intraorbital hydraulic pressure better than the orbital floor. Proponents of the “buckling” theory propose that the orbital floor is particularly vulnerable as the infraorbital canal further weakens the floor’s already delicate bony structure.

CT has become the modality of choice to evaluate orbital fractures. Herniation of orbital fat, the inferior rectus muscle, and the inferior oblique muscle may occur and herniated extraocular muscles entrapped between the fragmented bone segments may lead to diplopia. Edema and hemorrhage from the trauma can also cause diplopia; however this should resolve in a few days in the absence of entrapment. Immediate surgical intervention may be required in cases of entrapped extraocular muscles or acute enopthalmos. Chronic enopthalmos may also develop in fractures with extensive orbital fat herniation.
Pubblicato da David Spizzichino a 16:00