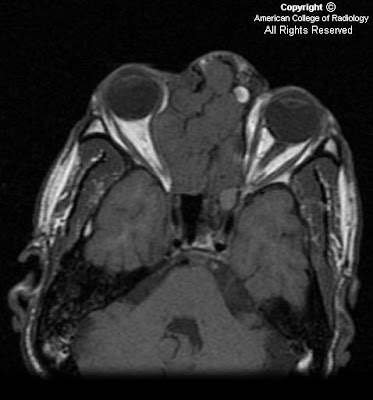 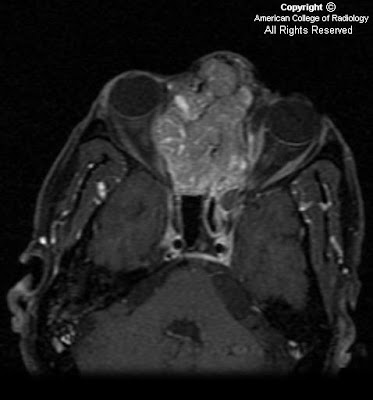 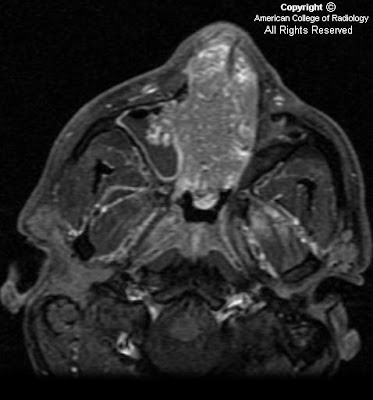 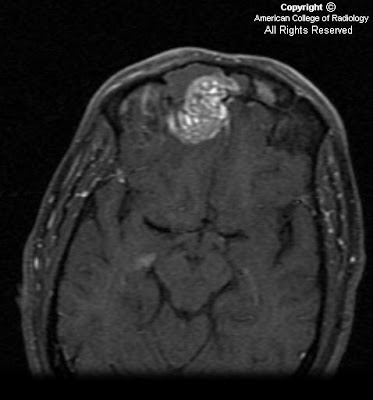 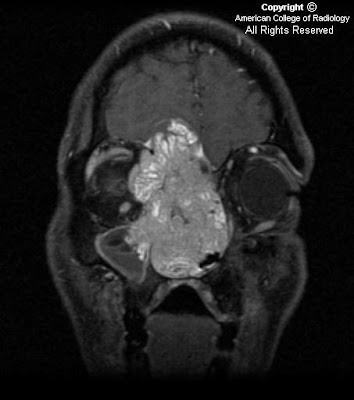 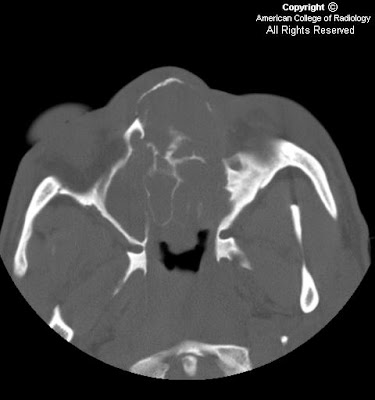 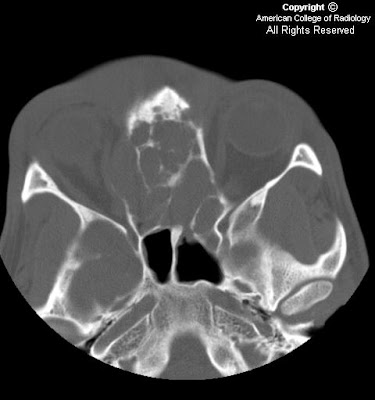 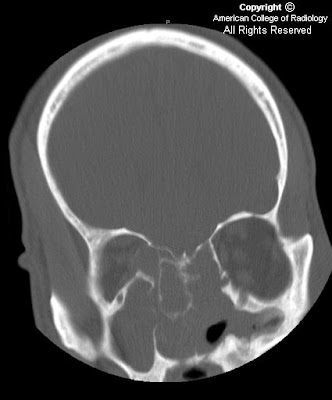 Multiple axial T1 images without and with intravenous gadolinium through the nasal cavity reveal a lobulated mass occupying the nasal passages (Figure 1, Figure 2 and Figure 3) with extension into the anterior cranial fossa (Figure 4 and Figure 5) as well as the right maxillary sinus (Figure 3).
This lesion demonstrates heterogeneous enhancement (Figure 2, Figure 3 and Figure 4) on post contrast axial and coronal T1 sequences. There is also thinning and remodeling of the bony septa of the nasal cavity on both axial CT (Figure 6 and Figure 7) and coronal CT reconstructions (Figure 8).


Benign but bulky tumor that usually originates from the lateral nasal wall in the nasal cavity as well as the ethmoidal and maxillary sinuses
"Inverting" term comes from endophytic growth of epithelia into the surrounding stroma
Can often harbor a concurrent squamous cell carcinoma, which enhances more homogeneously and centrally

Inverting papilloma is a benign, slow-growing tumor of epithelial origin that occurs most commonly within the nasal cavity and paranasal sinuses. The term ‘inverting’ stems from the observation on pathology that proliferation of epithelial cells occurs into the surrounding stroma by endophytic growth rather than exophytic growth, as is expected.

Clinically, the typical patient is a male between the ages of 40-60 years. The most frequent complaints are unilateral nasal obstruction, stuffiness, epistaxis, dysosmia, rhinorrhea and pain. Inverting papilloma can affect the orbits by proptosis or by deformation of the bony orbits.

Radiologically, inverting papilloma is a homogeneous and lobulated lesion with scattered calcification in a variety of patterns. On CT, it can often have a lobulated (‘cerebriform’) appearance which has been reported to be very specific. It enhances heterogeneously and peripherally in contrast to squamous cell carcinoma, which enhances more homogeneously and centrally. Inverting papilloma most often arises from the lateral nasal wall, adjacent to the middle turbinate and posterior to the uncinate process. If it affects the paranasal sinuses, it most commonly involves the ethmoidal and maxillary sinuses. Enlargement of inverting papilloma can produce local bone thinning, bowing or erosion. It often grows through the nasal choana into the nasopharynx.

Concurrent squamous cell carcinoma has been reported in about a quarter of cases. This is seen as bony destruction, multicentric soft tissue extension and nodal metastases. CT and MR are complementary in assessing the extent of this tumor’s involvement as this is crucial to planning accurate and complete surgical resection. Treatment involves endoscopic surgical resection but recurrence is rather common.
Pubblicato da David Spizzichino a 16:00